Size1750mL Proof80 (40% ABV)
Ideal for classic rum cocktails, this light and aromatic white rum from Bacardi is based on a traditional recipe from 1862. Taking your Mojito or Daiquiri to new heights, it's aged in American white oak casks and made with a secret blend of charcoal, making it exceptionally smooth.
Notify me when this product is back in stock. 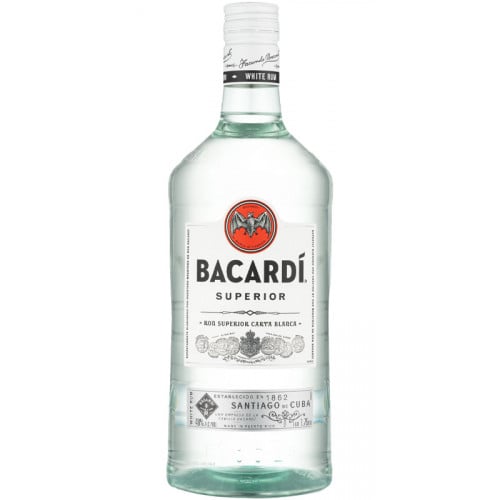 It was back in 1862 when Don Facundo Bacardi Masso introduced Bacardi Superior White Rum to the world after 10 years of polishing off the recipe. Bacardi Superior White Rum is the ideal rum for cocktails – it never dominates other flavors, but it also never disappears when mixed. Due to ageing in American white oak casks and a secret blend of charcoal, it’s exceptionally smooth and perfect for classic cocktails. The smooth and creamy palate rounded up by a dry, clean, and fresh finish really elevate the Mojito or the Daiquiri to new heights. Light and aromatic with floral and fruity notes, it’s bottled 40% ABV.

Light and aromatic, it greets with floral and fruity notes of orange blossom, lavender, almonds and fruit on the nose. The smooth and creamy palate continues with apricot, lime, light coconut, and ripe banana. The finish is dry, clean, and fresh.