Size750mL Proof60 (30% ABV)
The Orange Vanilla Twist limited summer edition adds a sweet and fruity creaminess to the iconic spiced rum recipe. Pour it over ice or mix it with cola for a delicious summertime refreshment. 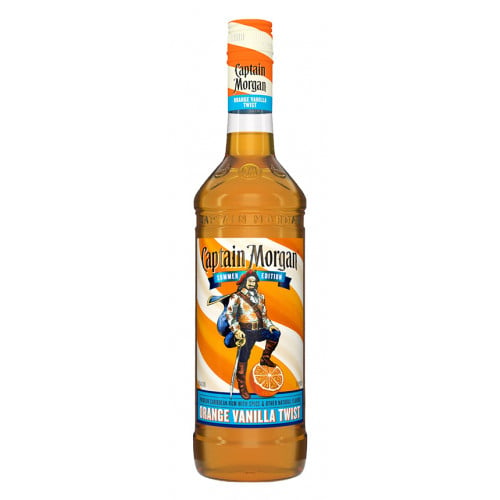 The Captain Morgan brand was founded in 1944 when the Seagram Company first started producing rum under the name Captain Morgan Rum Company. Seagram's CEO Samuel Bronfman purchased the Long Pond distillery from the Jamaican government, along with the rights to a rum by a Kingston pharmacy that sourced its spirit from the very same distillery, then spiced, aged, and bottled it. In 1985 the distillery was sold along with the rights to Captain Morgan. The brand came into Diageo's hands in 2001 and has remained under them since.

Captain Morgan has been sold in the US since 1984. Adorned with the iconic artwork by award-winning artist Don Maitz, it's one of the largest spirit brands on American soil and an instantly-recognizable classic. Distilled from sugar cane in continuous stills it is first aged for up to a year before the proprietary recipe of spices and flavors are added. Various indigenous Caribbean spices contribute to its distinct flavor profile. The lineup has expanded considerably with various additions ranging from Pineapple and Coconut Rum to Captain Morgan Apple Smash, a Private Stock offering, and several others. Captain Morgan Original Spiced Rum, naturally, remains their flagship offering.

Captain Morgan Orange Vanilla Twist combines their classic rum with the addition of orange and vanilla for a refreshing and fruity 60-proof offering. It's a limited summertime edition that adds a sweet and fruity creaminess to the iconic spiced rum recipe and goes perfect with some ice or mixed with cola or ginger ale.

Get ready for the summer with one of these limited-edition bottles today!

This summertime drink adds a sweet and fruity creaminess to the iconic spiced rum recipe. It's an explosion of orange juice on the nose, with vanilla candy, bubblegum, molasses, and spice notes. Finishes smooth and sweet with caramel and orange.