Size750mL Proof66.6 (33.3% ABV)
This limited-edition expression upgrades the Kraken spiced rum with a coffee bean essence and natural flavors for a rich, dark, and smooth drinking experience that is perfect chilled on its own or with various cocktails.
Notify me when this product is back in stock. 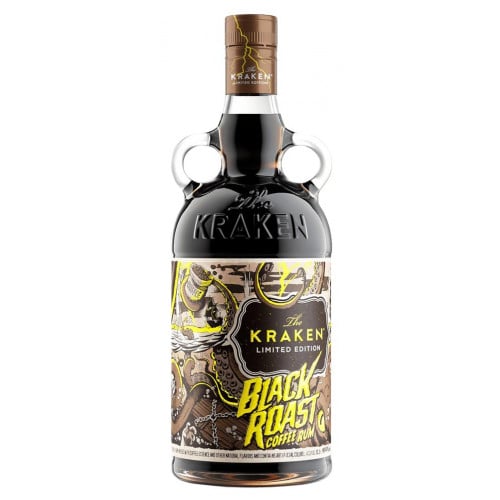 The spirit that is this spiced rum’s foundation is sourced from Trinidad. It is distilled from molasses crafted from locally-grown sugar cane. Kraken Black is aged for up to 2 years and blended with a mix of 11 spices, including cinnamon, ginger and clove. The bottle is inspired by a Victorian style, featuring two hoop handles. This is an age old tradition born from hanging bottled to prevent breakages.

Kraken Black Spiced Rum is distilled using pot stills and fermented from molasses made from sugar cane grown on nearby riverbanks of Trinidad. Natural yeasts ferment the water-thinned molasses. The rum is then aged in oak barrels for up to 24 months before being blended with a range of spices, including cinnamon, ginger, and clove.

The Kraken Rum Black Roast is available for a limited time and upgrades the spiced rum with a coffee bean essence and natural flavors. Bottled at an ominous 66.6 proof, it's a bold, rich, dark, and smooth drink that is delicious chilled on its own and works well with various cocktails.

The nose has ground coffee beans, molasses, chocolate, and spice. They are joined on the sweet palate by vanilla, nutmeg, coffee, cherry, cinnamon, and clove notes. Finishes slightly warming with coffee and molasses.