Learn more
Size750mL Proof101 (50.5% ABV) *Please note that the ABV of this bottle may vary
Distilled in 1979, this 101-proof whisky has spent 32 years in a first-fill oloroso sherry cask. With a balance of fruit and spice, it's a delicious expression that showcases the triple-distilled Lowland style.
Notify me when this product is back in stock. 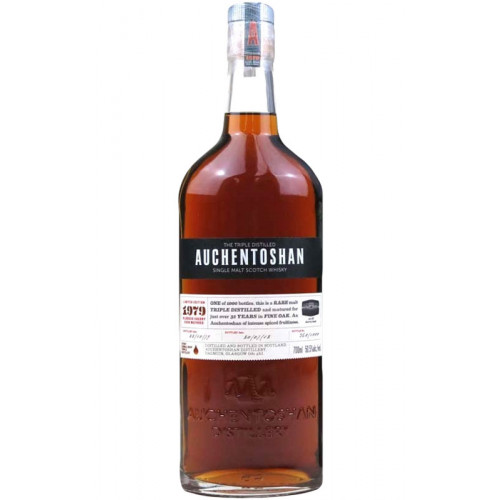 Auchentoshan Single Malt Scotch Whisky is made from malted, optic barley that is gently kilned and completely unpeated. The barley is milled and mashed before being fermented in wooden washbacks made from Oregon Pine. The wooden washbacks (as opposed to the stainless steel washbacks used at most distilleries) retain a portion of the heat produced during fermentation, and ultimately produce a lighter and slightly sweeter whisky.

While Scotch whisky is traditionally distilled twice, Auchentoshan Single Malt Scotch is copper-pot distilled three times — first through a wash still, then through an intermediate still, and finally, through a spirit still. This extra step during distillation — no other major distillery uses an intermediate still — is both time-consuming and expensive, but it produces a 160-proof Whisky that is incredibly pure and free of impurities.

This 32-year-old is a single-cask expression that was distilled in 1979. It has spent the entirety of its maturation in a first-fill oloroso sherry cask before being bottled at 101 proof. Fruity and spicy, it's a wonderfully mature whisky that showcases the triple-distilled Lowland style with panache.

Grab a bottle of this whisky today!

The nose is appropriately fruity with dried fruit, raisin, honey, white pepper, and hints of nuts. The palate is creamy and rich with oak, vanilla, cinnamon, caramel, finishing oaky with a touch of mint, spice, tobacco, and dried fruit.