Size750mL Proof86 (43% ABV)
Aged for 21 years, this rum earned a score of 98 points from Wine Enthusiast.
Notify me when this product is back in stock. 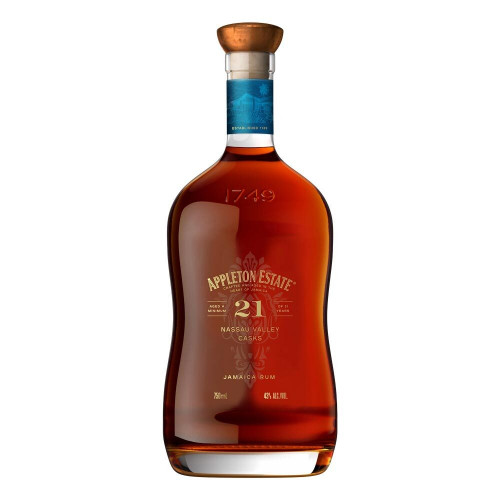 In 1655, a British expedition led by Sir William Penn and General Robert Venables captured the island of Jamaica from the Spanish. Following the conquest, Frances Dickinson — a soldier in Venables' army — was granted land in exchange for his honorable services. This land would eventually become the foundation of the Appleton Estate.

Since 1749, the Appleton Estate has been crafting some of the world's finest rum from sugarcane grown on it's 11,000 acre estate. Once the sugarcane is harvested, it is fermented with exceptionally soft water that originates on the Estate and is naturally filtered through limestone hills. In addition, the fermentation process uses a proprietary strain of yeast that contributes a unique aroma and flavor profile to the rum. Following fermentation, the rum is distilled through copper pot and column stills.

Appleton Estate 21 Year Old Rum is Appleton's flagship rum. It has matured for a minimum of 21 years in oak casks, giving it a dark copper color. Notes of tropical fruits, brown sugar and cocoa dominate the palate, and are complemented by smooth undertones of orange, nutmeg and vanilla. The finish is bold and elegant, with touches of bittersweet chocolate, espresso and chai tea.

Appleton Estate 21 Year Old earned a score of 98 points from Wine Enthusiast, which rated it the Best Rum of 2014. In addition, it earned the Double Gold Medal at the San Francisco World Spirits Competition in 2014. Pick up a bottle today!

Notes of tropical fruits, brown sugar and cocoa dominate the palate. Smooth undertones of orange, nutmeg and vanilla. Finish is bold and elegant, with touches of bittersweet chocolate, espresso and chai tea.