Size750mL Proof112 (56% ABV)
This Islay single malt expression from independent bottler Alexander Murray is a 2005 vintage Bruichladdich that has spent 12 years in ex-bourbon casks. The peated whisky was bottled at 112 proof.
Notify me when this product is back in stock. 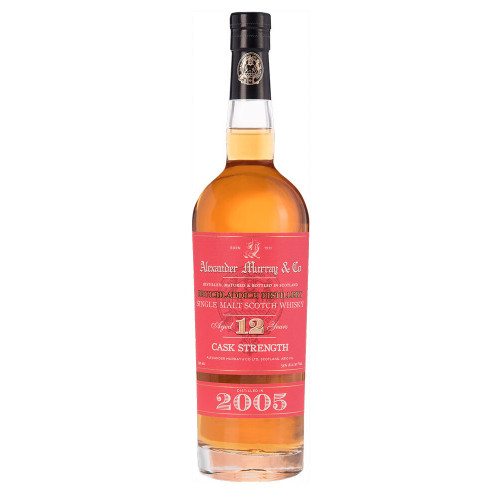 The company has also been working with trade customers all over the USA, developing and launching their own brand spirits. Lipp feels huge pride for and is passionate about promoting ‘The Water of Life’, and firmly believes Scotch whisky should be approachable and accessible to all. The label has a diverse lineup of products ranging from their extensive Vintage Malt collection, the Monumental blended Scotch range (available in 18- and 30-year-old expressions), The Polly’s Casks bottlings containing Tullibardine single malt finished in Firestone Walker’s Double DPA beer casks, and their signature single malt, the Bon Accord, to name a few.

This expression comes from Bruichladdich, an award-winning distillery employing generations of distilling knowledge and the principle of minimal intervention. Built in 1881 on the wild Scottish island of Islay, Bruichladdich distillery still uses the original Victorian equipment to create a range of single malt whiskies that are trickle distilled, matured, and bottled solely on Islay by a skilled team implementing revolutionary, modern interpretations of time-honored ideas and challenges the comfortable conventions of a whisky establishment. The peated expression is a 2005 vintage that has spent a dozen years in smaller ex-bourbon casks, before being bottled at 112 proof.

This expression has notes of fruit, toasted sourdough bread, and salty brine notes. There are smoky peat notes as well as oak and spice, and some additional pleasant farmhouse notes. The finish is sweet and smoky.