Size750mL Proof92 (46% ABV)
Aged for ten years in used bourbon casks and finished for two years in Sauternes casks, this whisky earned a score of 95 points from Wine Enthusiast. 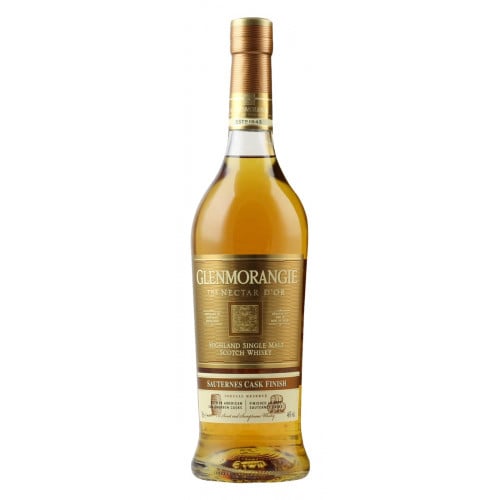 Following distillation, Glenmorangie Nectar D'Òr Single Malt Scotch Whisky is aged for a minimum of ten years in casks that were previously used to mature bourbon. After its decade-long beautyrest, the single malt is double-barreled, or finished, for an additional two years in ex-Sauternes casks. Sauternes is a type of sweet wine from the eponymous region in France known for its fruity, nutty flavors. "The result of extra-maturing Nectar D'Òr has improved the voluptuous whisky," says Dr. Bill Lumsden, Glenmorangie's Master of Whisky Creation (Lumsden holds a PhD in Biochemistry and wrote his thesis paper on yeast physiology).

Glenmorangie Nectar D'Òr Single Malt Scotch Whisky has an aroma of honeysuckle and creamy vanilla, which leads to notes of rich nuts, dark chocolate and cinnamon on the palate. These notes are complemented by touches of peaches, apricots and pineapples with a subtle, peppery undertone. Glenmorangie Nectar D'Òr (Nectar D'Òr translates to drink of gold in ancient Gaelic) earned a score of 95 points from Wine Enthusiast, which rated it one of the Top 50 Spirits of 2011. In addition, it earned a score of 94 points from Jim Murray's Whisky Bible, which called it "outrageously good."

Aroma of honeysuckle and creamy vanilla. Notes of rich nuts, dark chocolate and cinnamon on the palate, complemented by touches of peaches, apricots and pineapples with a subtle, peppery undertone. Finish is long and elegant, with a satisfying caramel touch.