Size750mL Proof80 (40% ABV)
Aged for a minimum of 18 years, this whisky earned five stars from F. Paul Pacult's Spirit Journal.
Notify me when this product is back in stock. 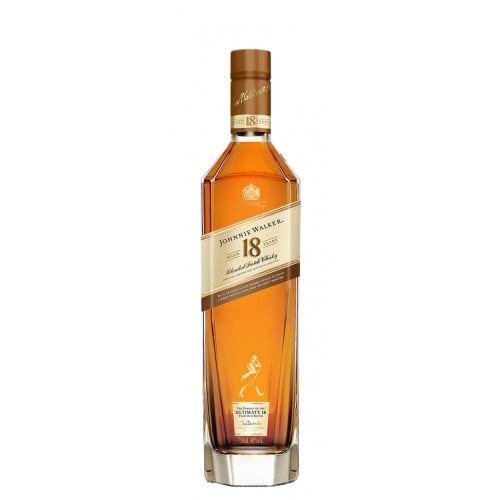 Inspired by this tradition, Johnnie Walker 18 Year Old is a supremely rich and full-flavored whisky crafted to be enjoyed during special moments. The whisky is made by marrying together a select number of casks that were carefully chosen from two dozen distilleries and retained throughout maturation as a result of their exceptional character and potential. Each cask used in the making of Johnnie Walker 18 Year Old has matured, like stated in its name for at least 18 years, giving the whisky an intense yet smooth flavor profile.

Whisky has an aroma of creamy vanilla, almonds, and tangerines. The aroma gives way to notes of warm fruit, smooth caramel and dates on the palate, which are well-complemented by a subtle smoky undertone. The finish is endless and classic, with notes of sweet vanilla and spicy oak.

Aroma of creamy vanilla, almonds and tangerines. Notes of warm fruit, smooth caramel and dates on the palate, which are well-complemented by a subtle, smoky undertone. Finish is endless and classic, with notes of sweet vanilla and spicy oak.