Size750mL Proof92 (46% ABV)
Wolfburn Northern earned a Gold medal at the World Whisky Awards 2017 and Double Gold Medal winner, FiftyBest 2018.
Notify me when this product is back in stock. 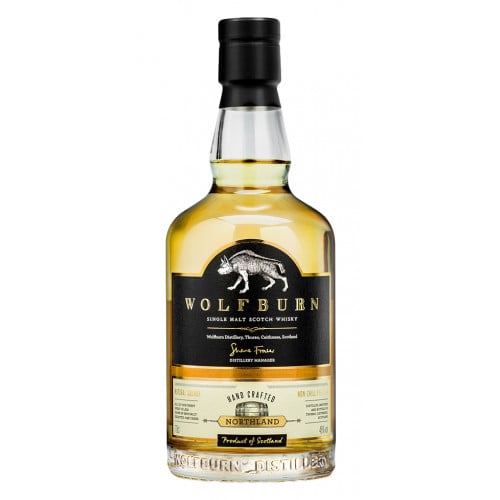 The original Wolfburn Distillery was founded in 1821 by William Smith, on the outskirts of Thurso in Caithness, Scotland. The distillery took its name from the watercourse it drew from, “burn” being the Scottish word for stream or small river. As Smith invested heavily in the distillery, it became a significant enterprise for the region — tax records for the 19th century show it was the largest producer of malt whisky in Caithness. The distillery was kept in the Smith family until at least the 1850s when records become scarce and it’s estimated that production began to cease (a survey map from 1972 depicts the distillery in ruin).

After 150 years of neglect, a group of private investors stumbled upon the old Wolfburn Distillery in May, 2011 — seeing massive potential, the investor began to rebuild the distillery from the ground up. The new Wolfburn Distillery, which, by law, must use water sourced from the same stream used centuries ago, is crafting unpeated malt whisky from a blank canvas through old-fashioned pot-still distillation; no automation, no rush and a lot of care.

Wolfburn Northland is the first modern release from this distillery. Aged onsite in primarily American oak quarter casks with a smaller portion aged in ex-sherry, the result is a smooth, warming whisky, the first chapter in the history of Wolfburn. Wolfburn Northland earned a Gold medal at the World Whisky Awards 2017 and Double Gold Medal winner, FiftyBest 2018.

Initially sweet with notes of fruit and fresh sea air. In the background you’ll find citrus freshness and hints of cereal, and just a trace of peat smoke. Sweet, nutty tones come to the fore, with hints of grapes and honey in the background. Floral flavors abound, enhanced with just a hint of dried fruit and spice.