Size750mL Proof110 (55% ABV)
The first legal absinthe available in the United States since 1912, Absente Absinthe Refined is made with the notorious wormwood's less bitter cousin: southern wormwood. Bottled at 110 proof, this green fairy should be sipped slowly. 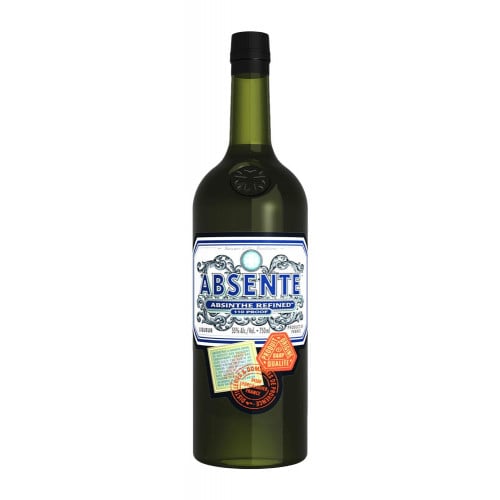 Located in the Lure region, France, where in the 17th century, traders of medicinal herbs settled and later became pharmacists, Distilleries et Domaines de Provence is a distillery with over a century of experience in aperitifs and Provencal liqueurs production. Founded in 1898 in Forcalquier as Distillery de Lure, it was renamed in 1974 when Alain Robert took over the company.

Absinthe is a spirit with a very high alcohol content, bottled between 90 and 148 proof. It has an anise flavor that comes from plants, flowers and other medicinal and culinary herbs. Rising to popularity in the last decade of the 19th century also known as the Belle Epoque, it was in this era that absinthe was notoriously consumed by the likes of Picasso, Van Gogh, Manet and other artists that adored it for its strong effects as it's said to even cause hallucinations due to its wormwood compound.

Banned in the early 20th century, absinthe became ‘absente’, which meant the wormwood was absent from the spirit. For nearly 100 years, absinthe was outlawed in the United States and Absente is the first legal absinthe available in the United States since 1912. The signature spirit of artists like Van Gogh and Toulouse-Lautrec is still handcrafted in the South of France, using only the highest quality artisanal distillation methods and ingredients, including anise, star anise, balm, peppermint and a full measure of the legendary and notorious botanical Wormwood, also known as artemesia absinthium. The only difference that separates Absente Absinthe Refined from the historic spirit is the replacement of notorious wormwood with its less bitter cousin – southern wormwood, also known as 'petite absinthe'. Bottled at 110 proof, you'll immediately recognize its signature pale green color and an anise-forward nose.

Pick up your absente today!

Signature pale green color. An anise-forward nose greets with star anise and fresh herbs. The palate is sweet and vegetative with notes of fennel and anise leading the way. The finish is short and sweet.