Learn more
Size750mL Proof96 (48% ABV) *Please note that the ABV of this bottle may vary
Casg Annamh is triple-cask matured limited batch single malt from Aberlour Distillery. This is the fourth edition of this whisky, which is matured in European oak Sherry casks and two types of American oak cask. This expression is the ideal introduction to Sherry cask matured whiskies for malt lovers.
Notify me when this product is back in stock. 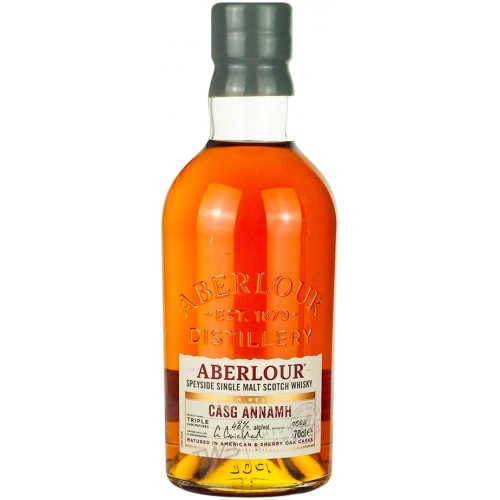 Aberlour Distillery, which has won an outstanding list of trophies and medals, is strongly rooted in the community, and makes its generously multi-layered whiskies using pure, soft Ben Rinnes water from nearby natural springs and the finest locally sourced barley. The founder’s mantra of ‘Let the deed show’, is strongly manifested in the end product, and the distillery makes some of the best single malt Scotch whiskies being produced today. The distillery’s whiskies are generally double-cask matured for a minimum of 12 years, first in ex-American Oak barrels, followed by finest hand-picked Oloroso Sherry butts.

Casg Annamh means Rare Cask in Gaelic, and this expression is created from a limited number of carefully selected barrels. Aberlour Casg Annamh is triple-cask matured, using European oak sherry casks and two types of American oak cask. Casg Annamh is a distinctively rich single malt providing adventurous malt lovers with the ideal introduction to Sherry cask matured whiskies. This is the fourth release in the series of this limited batch whisky.

The nose is rich and sweet, with fruity notes of tangy orange, glazed cherries, raisins and a hint of ginger. This is followed by sweet and fruity flavors of apple and cinnamon crumble on the palate, accompanied by ripe peaches with spicy notes of licorice and cloves. The finish is long, rich and fruity, with a touch of dry spice.