Size750mL Proof80 (40% ABV)
Once banned from the U.S. market, Żu Żubrówka vodka is a rye distillate with the flavor of a grass unique to the woods of Poland that is eaten by the country’s endangered Bison population.
Notify me when this product is back in stock. 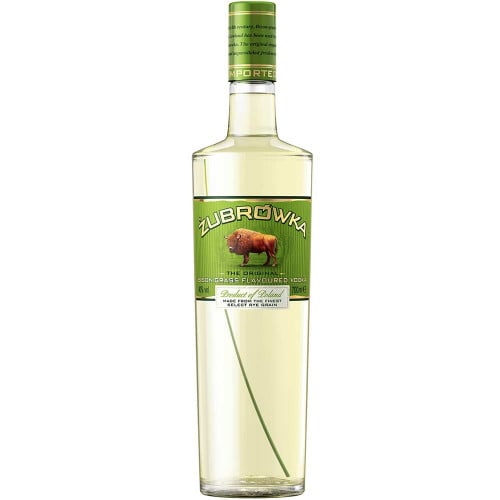 Since the 14th century, Poland has produced rye distillate flavored with a particular grass eaten by Bison in the Bialowieza, Europe’s largest woods straddling the Polish-Belorussian border, nearly unchanged for over 6,000 years. For this reason, it is commonly referred to in English as “Bison Grass Vodka.” A favorite of the nobility and peasantry alike since the 18th century, Żubrówka was once thought to increase stature and youthfulness of those who drink it.

In 1978, the FDA banned Żubrówka due to a natural chemical in the grass that may thin the blood. For over 30 years, bottles could only be purchased within the United States on the black market. After over a decade of testing and reformulation, the producers of Żu have come up with a formula that tastes identical to the original Bison Grass vodka without the potentially toxic chemical, using herbs and seasonings from the Bialowieza. Like the original Żubrówka, this version comes with a strand of real bison grass in the bottle.

Żu is light yellow in color with an aroma of citrus, and herbs. A distinct pistachio flavor carries the otherwise vegetal palate, with a creamy viscosity and a lasting finish of lemon and nuts.

Somerset Maugham, the famous British playwright and novelist, wrote in his 1944 tome The Razor's Edge that Żubrówka "smells of freshly mown hay and spring flowers, of thyme and lavender, and it's soft on the palate and so comfortable, it's like listening to music by moonlight." Na zdrowie! Now you too can taste the aroma of what the Poles call their country’s “green lungs”.

Light yellow in color with an aroma of citrus, and herbs. A distinct pistachio flavor carries the otherwise vegetal palate, with a creamy viscosity and a lasting finish of lemon and nuts.