Be the first to review this product
Absolut Vodka is the world’s leading premium vodka made in southern Sweden from natural, locally sourced ingredients. Produced with a process of continuous distillation, this vodka is exceptionally pure and smooth.
$31.99
Add to Wish List

Absolut Vodka was launched in New York in 1979, however the world’s leading premium vodka stands on over 100 years of vodka-making tradition. In 1879, Swedish entrepreneur, Lars Olsson Smith, also known as The King of Spirits, introduced Absolut Rent Bränvin (Absolute Pure Vodka). What set his vodka apart from others in the market was its purity, achieved by the innovative process of continuous distillation that removes the last remnants of fusel alcohols and impurities. This process is still used today to make Absolut, while every bottle of Absolut bears a silver medallion with Smith’s portrait. When introduced globally a century after its invention, Absolut’s innovative and creative spirit shone through in its bold marketing. In order to get noticed in the late 1970s New York, where everything seemed flashy and showy, the company designed a transparent and label-less bottle, inspired by 18th century apothecary bottles. Absolut pioneered collaboration with artists. Their first collaboration was with no other than Andy Warhol in 1985, and some 550 artists have been commissioned by the brand since. The Spritmuseum in Stockholm has over 850 pieces of Absolut art on display. Absolut is now part of the Pernod Ricard global family.

Every drop of Absolut vodka is produced at one place, a distillery just outside the village of Åhus in southern Sweden, from locally sourced ingredients. Every day about 600 tons of winter wheat arrive at the distillery from the Skåne region. Focused on operating sustainably, the distillery became one of the most energy-efficient ones in the world through constant improvement. The company offsets its CO2 footprint by planting trees, making its distillation carbon neutral. The distillery also promotes sustainable farming in its community of about 400 farms, minimizes waste and uses bottles partly made from recycled glass.

Absolut Vodka is made in southern Sweden from natural, locally sourced ingredients and with no added sugar. Produced with a process of continuous distillation, this vodka is exceptionally pure and smooth.

Clean nose with a touch of sweetness opens up to a rich, full-bodied and smooth palate. The finish is smooth, with a hint of wheat. 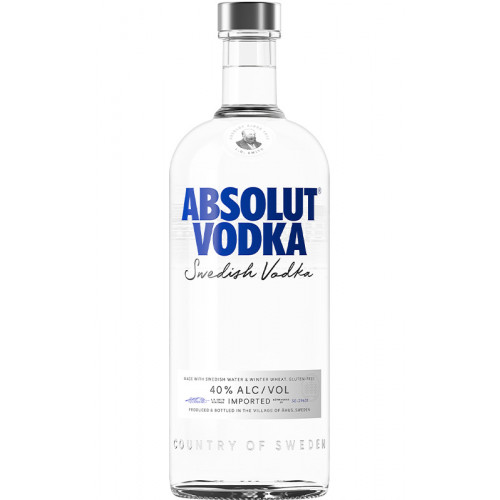