Be the first to review this product
Chopin's flagship Potato Vodka is a single-ingredient quadruple-distilled spirit that is proud of letting its flavor shine through. It has won several medals at the San Francisco World Spirits Competition.
$29.99
Add to Wish List

Chopin Vodka is named after the famous Polish classical composer Frédéric Chopin. Produced by Polmos Siedlce, their classic vodkas are quadruple distilled from either potatoes, wheat, or rye grains. It is a small-batch Dorda family affair that first made its debut in North America in 1997. Though they are most renowned for their potato vodka, their label has expanded their portfolio to include what are considered to be some of the "finest single ingredient" vodkas around, recently adding vodka-based caramel, chocolate, and coconut liqueurs to the lineup as well.

They are going against the popular belief that the spirit should be as neutral as possible, refusing to use any flavoring and coloring and proving that the single ingredient used in each expression can shine through. Distilling their vodka in the Chopin distillery in the Polish village of Krzesk, they claim a whole 7 pounds of potatoes are used to make a liter of the spirit. All the ingredients are sourced locally and most of the process is done by hand, using a copper column still.

Chopin’s critically acclaimed Potato Vodka expression has earned several gold and silver medals at the San Francisco World Spirits Competition along with many other prestigious awards. It's a creamy and full-bodied spirit that is silky smooth and perfect for enjoying on its own or in any kind of mixed drink.

The creamy profile has notes of vanilla and green apples on the nose. It's particularly full-bodied, earthy, and creamy on the palate, finishing crisp, clean, long, and smooth. 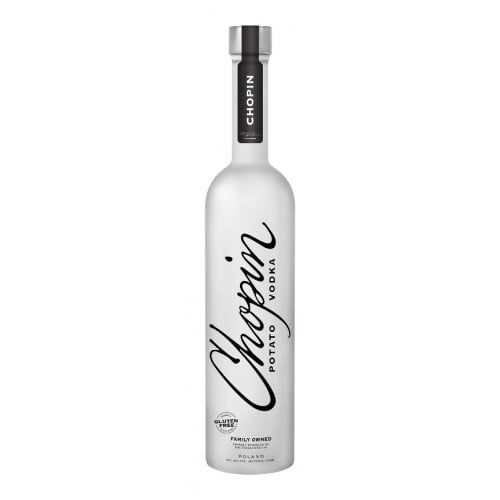