Size750mL Proof80 (40% ABV)
Made from local grains and Irish spring water, this vodka was awarded a 93-point rating at the Ultimate Spirits Challenge.
Notify me when this product is back in stock. 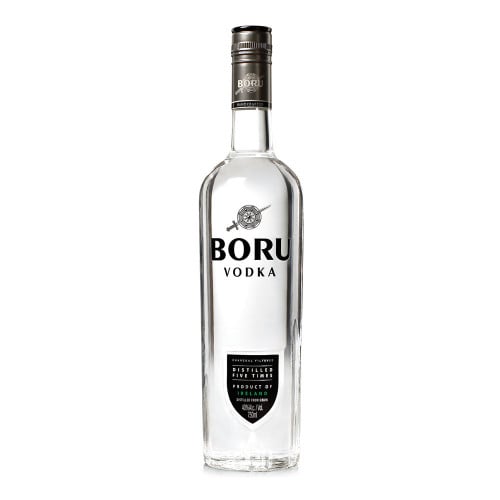 Around the time 1,000 B.C., Ireland’s population of 500,000 was ruled by a disparate group of more than 100 regional kings, each with greater or lesser domains. Aiming to change that, Brian Boru — son of the accomplished Cennétig mac Lorcain — made himself King of Munster, subsequently overthrowing the Uí Néill dynasty and establishing himself as the first High King of Ireland. By declaring himself “High King,” Boru steered Ireland in the direction of the British and French monarchies, in which religion played a critical role in sovereign rule.

Named for Boru himself, Boru Irish Vodka is made using local grains and pristine Irish spring water. Distilled five times for exceptional clarity and smoothness, Boru Irish Vodka has a slightly-bready aroma along with a pleasant grassiness on the nose. The palate is mouth-coating, with sharp, peppery flavors leading to a warm and balanced finish.

Boru Irish Vodka was awarded a 93-point rating at the Ultimate Spirits Challenge in New York.

Try a bottle of this legendary vodka today!

Slightly-bready aroma along with a pleasant grassiness on the nose. The palate is mouth-coating, with sharp, peppery flavors leading to a warm and balanced finish.