$69.99
Caskers Rewards members earn up to 3 store points back when buying this bottle.

Size750mL Proof90 (45% ABV)
Aged for a minimum of three years, this whiskey is the product of New Holland's brewing roots intertwined with its passion for craft spirits. 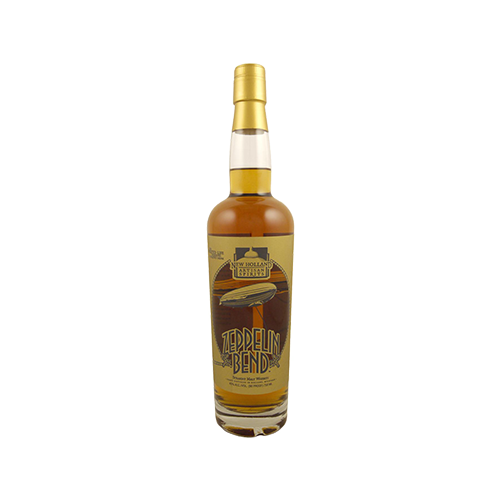 "The craft beer movement has sparked a real curiosity in average beer drinkers, who say to themselves that they don't need to drink the same product anymore," says Brett VanderKamp, the cofounder of New Holland Brewery and Artisanal Spirits. "We want to do the same thing with whiskey drinkers."

Situated on the banks of Lake Macatawa in Holland, Michigan, New Holland Brewery and Artisanal Spirits is best known for brewing craft beers such as Dragon's Milk Ale and White Hatter Pale Ale. In 2005, however, VanderKamp added a still to his brewery and began distilling spirits.

New Holland Zeppelin Bend Straight Malt Whiskey is the culmination of New Holland's brewing roots intertwined with its passion for craft spirits. The whiskey is made from 100% barley, a portion of which is heavily roasted. "This type of heavily-roasted barley is the same stuff we use in our porters and stouts and lends flavors of dark chocolate, coffee and cocoa to the whiskey," says VanderKamp. After the grains are sourced from the American Midwest, they are mashed and fermented by New Holland's brewers using a brewer's yeast at low temperatures. "Our fermentation process, which lasts up to 10 days, is slow and methodical," says VanderKamp. "We're not looking to rush the process."

After fermentation is complete, the wash is twice distilled through New Holland's 800-gallon, antique copper-pot still (the still was originally made during World War II). Then, the whiskey is aged in new, American oak casks that have been heavily charred. These casks lend strong notes of cinnamon and oaky spice to the whiskey, and complement its notes of vanilla, toffee and sweet malt.

Following a three-year beautyrest, the whiskey is sampled by VanderKamp and his team in order to determine if it is ripe for bottling. Once the whiskey's flavors reach their peak of maturity — the team looks for bold, robust notes of malt, butterscotch and dark chocolate that lead to a smooth yet lingering finish — each batch is bottled by hand.

"We learned a lot of lessons while starting up the brewery. It's exciting to be able to use some of those lessons in expanding our artisan spirits," says VanderKamp. "We will always look for balance in our products, but in craft it's also about offering a new and original angle on an old standard."

Sweet aroma of malt and honey. Initial flavors are bold and robust, including barley, cocoa and dark chocolate. Lead to slightly lighter notes of vanilla and toffee, which fade to a finish with touches of cinnamon and oaky spice.