Learn more
Size750mL Proof96 (48% ABV) *Please note that the ABV of this bottle may vary
To craft this whisky chief blender Mr Shinji Fukuyo visited the Northern region of Spain to personally select the Spanish oak used to mature this sherry finish.
Notify me when this product is back in stock. 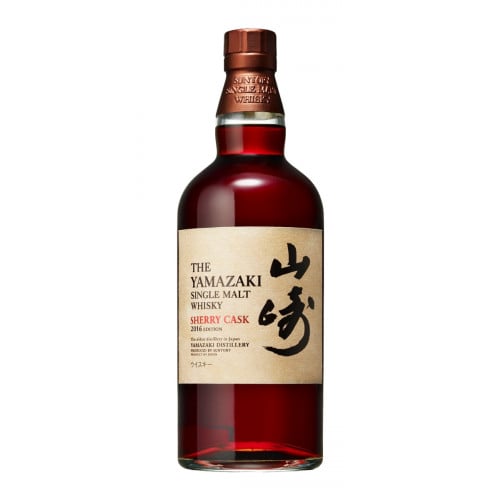 Yamazaki Single Malt’s are made from 100% malted barley, which is milled and mashed before being fermented with water sourced from the foothills of Mount Tenno. The water is said to be have been preferred by Sen No Rikyu, Japan's legendary tea master. After the barley has been fermented, the wash is distilled through Suntory's copper-pot stills — the first of their kind outside of Scotland.

Production of this expression is meticulously overseen by Mr Shinji Fukuyo, chief blender at the Yamazaki distillery. To craft this whisky Fukuyo visited the Northern region of Spain to select the Spanish oak used to store the Oloroso Sherry. Carefully overseeing the entire process from selection of the wood, to the charring and the aging of the sherry. After three years the seasoned sherry casks are sent back to Suntory’s Yamazaki distillery to mature an incredible blend of over 100 malt whiskies. After aging in Japan's unique environment — the constant changes in temperature and humidity force the wood and whisky to interact with each other.

After maturation Fukuyo selects casks that strike a delicate balance of chemistry between the Yamazaki malt and sherry cask. The precise selection process of the Spanish oak, the treatment of the sherry casks, and the overall maturation process achieves an award winning quality.

Inviting notes of sweet caramel on the nose with bright sherry notes, nuttiness, cocoa powder and tobacco. The palate is intense and bittersweet with notes of leather, cigar, and baking spice. The finish is lingering with notes of Madeira, dried plums, herbal tea, and cocoa powder.