Learn more
Size750mL Proof86 (43% ABV) *Please note that the ABV of this bottle may vary
Aged for up to 30 years, this whisky earned the Gold Medal at the International Wine and Spirits Competition, where it was named Best in Class.
Notify me when this product is back in stock. 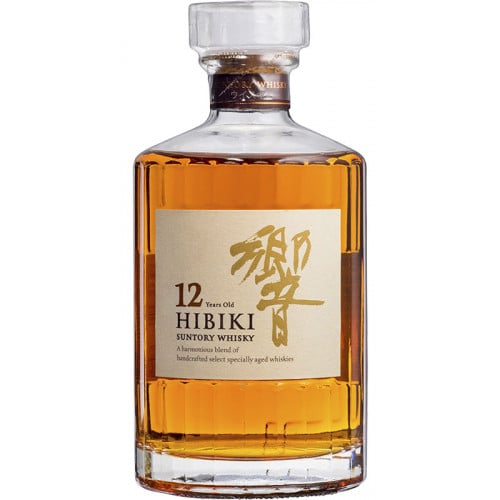 Hibiki 12 Year Old Japanese Whisky is crafted from a blend of over 30 unique whiskies produced at both Yamazaki Distillery and Hakushu Distillery, including some that have matured in previously-used Umeshu casks (Umeshu casks are specially coopered casks that are used in the maturation of plum liqueur). "This is all done by hand — the traditional way," says Osamu Abe, the manager of Yamazaki Distillery, referring to the cooperage taking place at the distillery. "This is called yagura — craftsmanship. You must watch and listen to how they're made. In Japan, we say "use all 5 senses." Of course we learn from others, but our own senses are key."

After each whisky used to craft Hibiki Whisky has matured for a minimum of 12 years (although some whiskies are matured as long as 30 years), the whisky is brought to proof using pure Japanese spring water. Hibiki, which translates to "resonance" in English, echoes the unique environment in which the whisky is distilled and matured. The whisky has an aroma of fruits, particularly pineapples and plums, with hints of honey and custard. The aroma gives way to a soft, mellow flavor profile that has notes of caramel, honeyed oak and apricots. The finish, which is elegant and complex, has touches of spicy wood, dried fruits and sour candy.

Each bottle of Hibiki 12 Year Old Whisky is crafted with 24 facets that represent the 24 seasons of the Japanese lunar calendar.