Size750mL Proof86 (43% ABV)
Aged for twenty-one years, this rare whisky, which was made by the Father of Japanese Whisky, was named the World’s Best Blended Malt Whisky by Whisky Magazine in 2009, 2010 and 2011, and is considered to be “one of the greatest whiskies of our time.”
Notify me when this product is back in stock. 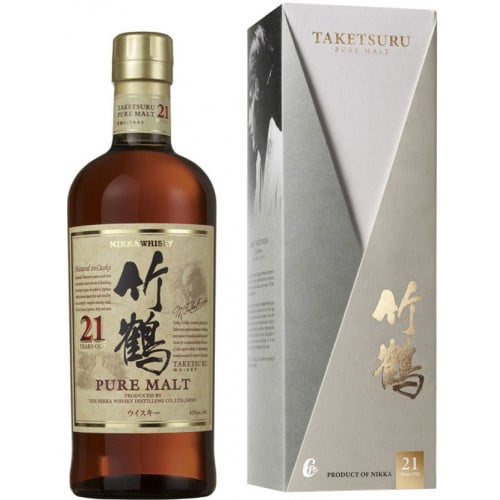 In 1895, Masataka Taketsuru — the father of Japanese Whisky — was born in the small town of Takehara, Japan. At the time, Masataka’s family owned a sake brewery, and in preparing to carry on the family trade, Masataka studied chemistry and biology at Osaka Technical High School. Upon matriculation, however, Masataka showed more interest in whisky than in sake and in 1918, enrolled at the University of Glasgow, becoming the first Japanese ever to study the art of whisky-making.

While in Scotland, Masataka took chemistry courses during the day while apprenticing with distilleries at night, learning to distill and blend whisky first-hand at some of Scotland’s most prestigious distilleries. In 1920, Masataka returned to Japan, and within the decade, had produced the country’s first single malt whisky.

Deeming the terroir perfect for whisky production, Masataka moved to the town of Yoichi in 1934 and opened the doors to Nikka Whisky Co. Yoichi is encapsulated by mountains (to the east, south and west) and by the Sea of Japan (to the north), creating a unique and isolated environment for whisky-production. The clean air, humidity and access to underground water filtered through a layer of peat results in a rich and masculine malt. Years later, Masataka established the Miyagikyo Distillery, which is also situated in northern Japan. Surrounded by mountains and two rivers, the Miyagikyo Distillery produces a milder and more feminine whisky than Yoichi.

Taketsuru 21 Year Old Pure Malt Whisky is a blend of single malt whiskies produced at the Yoichi and Miyagikyo distilleries. Aged for 21 years, the whisky has lush notes of tropical fruits, roasted nuts and mocha that are complemented by a sweet, malty undertone. The finish is long and complex, with notes of citrus, cinnamon and woody spices lingering.

Taketsuru 21 Year Old Pure Malt Whisky was named the World’s Best Blended Malt Whisky by Whisky Magazine in 2009, 2010 and 2011, and is considered to be “one of the greatest whiskies of our time.”

Notes of tropical fruits, roasted nuts and mocha that are complemented by a sweet, malty undertone. Finish is long and complex, with notes of citrus, cinnamon and woody spices lingering.