Size750mL Proof88 (44% ABV)
Aged for a minimum of five years in charred, white oak barrels, this Wyoming Bourbon is distilled and aged in Kirby, Wyoming, where temperatures fluctuate from sub-zero in the winter to 130+ in the summer.
Notify me when this product is back in stock. 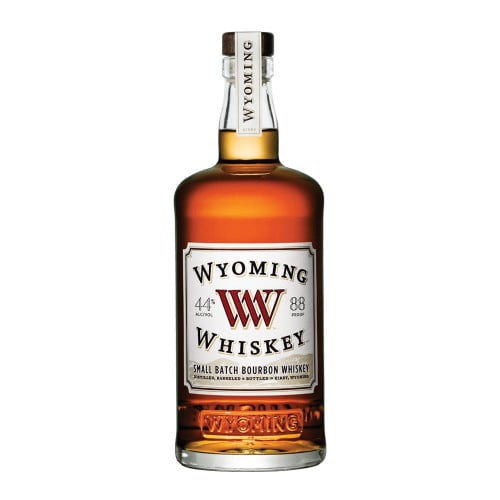 Mead developed the recipe for his Wyoming Small Batch Bourbon Whiskey with the help of Bourbon Hall of Fame member Steve Nally, who previously spent over 30 years at Maker’s Mark, and Lincoln Henderson, the founder of Angel’s Envy. The mash bill itself reflects the rustic and beautiful terroir of Wyoming State — all of the grains (corn, wheat and barley) are grown within 100 miles of the cutting-edge distillery.

Once distilled through both a column and pot still, Wyoming Small Batch Bourbon Whiskey is aged for at least five years in charred, white oak barrels stored at one of three warehouses in Kirby. During the summer, temperatures can reach sustained levels of 130+ degrees, whereas the winter frequently brings sub-zero temperatures. This extreme fluctuation results in a whisky that is more dynamic in less time aging.

Bottled at 44% ABV (Wyoming was the 44th state to join the Union), Wyoming Small Batch Bourbon Whiskey has soft aromas of cornbread, vanilla, and summer flowers, while the palate delivers bright flavors of lemon zest and coffee cake, and fresh notes of spring garden, with a gentle, mellow finish. The finish is subtle and incredibly smooth.

“One of the best bourbons I’ve ever tasted”. - Mark Gillespie, Whisky Cast

Soft aromas of cornbread, vanilla, and summer flowers, while the palate delivers bright flavors of lemon zest and coffee cake, and fresh notes of spring garden, with a gentle, mellow finish. The finish is subtle and incredibly smooth.