Size750mL Proof100 (50% ABV)
An outrider is an equestrian term, referring to the one who stands apart from a band of horses for the purposes of herding, keeping the others from wandering astray.

Wyoming Whiskey Outryder has recently changed its designs, and as the original labels are being phased out, there is still a chance that you might receive a bottle different than what is in the picture. Rest assured, the liquid remains the same, regardless of the design.
Notify me when this product is back in stock. 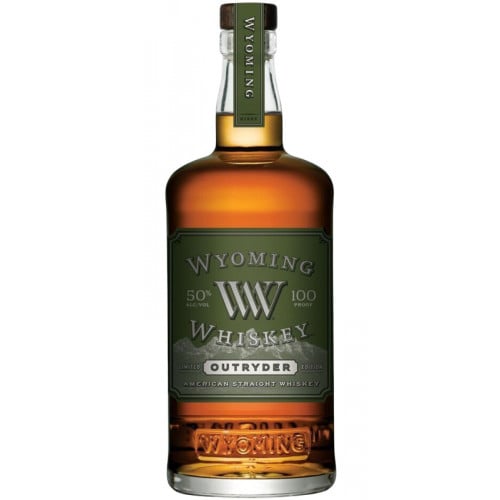 Wyoming Whiskey Outryder is a unique straight American whiskey with higher rye content, falling just short of a true rye whiskey. It is crafted from two different mash bills that were distilled in November of 2011. The first mash bill contains 48% winter rye, 40% corn, and 12% malted barley and the second reflects a traditional bourbon mash bill of 68% corn, 20% winter rye, and 12% malted barley. These non-GMO grains are grown in Byron, Wyoming by Rageth Farms. Bottled in bond, it delights with flavors of fresh ginger snap in balance with lemon cake, vanilla, and freshly milled grain. The best of bourbon and rye in one bottle.

Black tea, chocolate and baking spice aromas on the nose. The palate has notes of fresh ginger snap in balance with lemon cake, vanilla, and freshly milled grain, lots of rye spice, freshly baked dark rye bread with hints of mint, and baking spice with creamy butterscotch pudding. The finish is long and spicy coupled with hints of buttery toffee and nuts.