Size750mL Proof90 (45% ABV)
Made from 100% rye mash, locally sourced from Colorado farms, this Straight Rye is aged for at least 4 years in new American oak and bottled at 90 proof. Winner of Double Gold at the 2016 San Francisco World Spirits Competition.
Notify me when this product is back in stock. 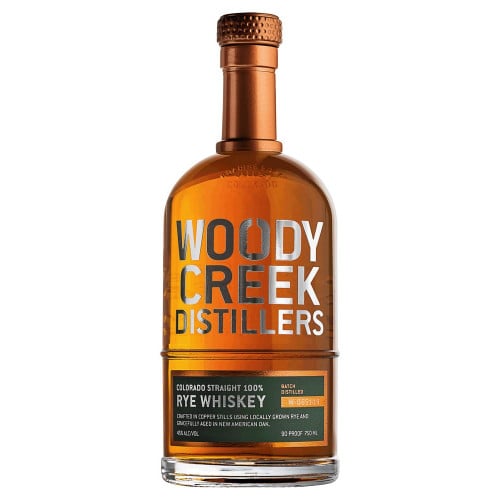 Situated in the valley of the Roaring Fork River, Basalt is a little mountain village at the heart of the Rocky Mountains, 15 miles west of Aspen, Colorado. This is the home of Woody Creek Distillers, a craft distillery founded in 2012 by Mary and Pat Scanlan and Mark Kleckner with a simple mission – to make the finest craft spirits with unique taste and character, honoring and protecting their origins and natural resources.

A grain to glass distillery, the grain is grown and harvested on their family farm and on the farms of their neighbors in Colorado. Boasting their own custom CARL stills, Woody Creek never uses spirits from neutral grain spirits or blends with base spirits from other distillers. Instead, every element of production from farm to bottle is controlled at Woody Creek Distillers. Their award-winning portfolio ranges from Potato Vodka, made from Rio Grande potatoes, grown on their farm, Colorado 100% Straight Rye, Roaring Fork Gin and Colorado Bourbon.

Woody Creek Distillers Colorado Straight Rye Whiskey is made from 100% rye mash, locally sourced from trusted Colorado farms. After distillation in copper stills and on-site maturation for at least for years in new American oak casks, it’s bottled at 90 proof. At Woody Creek they say this is how you turn rye into gold and with Colorado Straight Rye having won Double Gold at the 2016 San Francisco World Spirits Competition, that’s hard to argue with. A wonderful whiskey for beginners and veterans alike.

Light yellow. Starting off with a subtle nose, the palate is sweet, smooth and fruity. The finish is long and complex with a touch of rye spice.