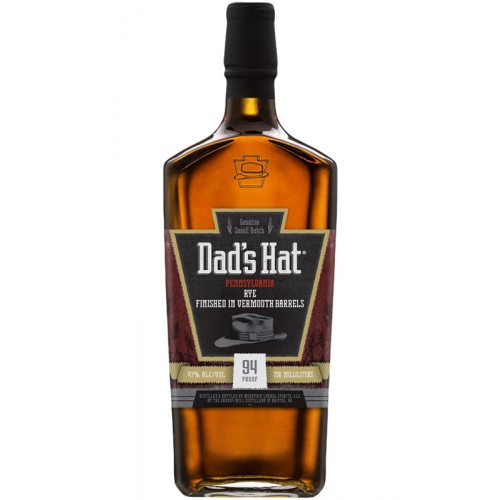 "Dad's Hat Pennsylvania Rye Whiskies pay homage to our state's rich tradition of making small-batch whiskey," says Herman Mihalich, master distiller at Mountain Laurel Spirits. Raised in Monessen (a small city situated in southwest Pennsylvania) and armed with a Bachelor's degree in Chemical Engineering from the University of Pennsylvania and an MBA from Wharton, Mihalich has spent most of his life in Pennsylvania. "I really wanted to revive that entrepreneurial spirit and rich rye heritage we have here," he says.

Dad's Hat Vermouth-Finished Pennsylvania Rye Whiskey is also aged in charred, white oak quarter casks (15-gallon casks) for just under one year. Following its initial maturation, however, the rye is double-barreled, or finished, in Vya Vermouth barrels for an additional three to four months. The barrels, sourced from the Quady Winery in California, were used to mature a vermouth made from a blend of over 17 different herbs and spices, and contribute notes of sweet citrus, berries and poached pears to the rye, which complement its undertones of cinnamon and spicy grains.

After maturing, Dad's Hat Vermouth-Finished Rye Whiskey, is brought to proof and bottled by hand.