Size750mL Proof90 (45% ABV)
This expression is based on the finished 5-year-old Straight Bourbon, which spends an additional 6 months in ruby port barrels that add additional fruity and chocolate notes to the rich bourbon profile.
Notify me when this product is back in stock. 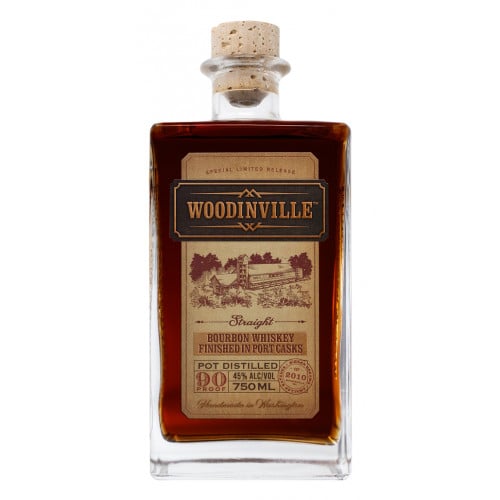 Woodinville has already received notable accolades including "Craft Whiskey of the Year" for their Straight Bourbon, and "Craft Rye Whiskey of the Year" for their Straight Rye by the American Distilling Institute in 2018 and 2017 respectively. All of the grain used in production is grown exclusively for Woodinville whiskeys on the Omlin Family Farm in Quincy, Washington, run by third-generation farmers, Arnie and Phyllis Omlin.

The locally sourced grains are mashed, distilled, and barreled in their Woodinville distillery, before heading over the Cascade Mountains to their private barrelhouses, where Central Washington’s extreme temperature cycles stimulate the extraction of natural flavors from the oak. Before being coopered, the barrel wood used for maturation is open-air seasoned for eighteen months, allowing the elements to soften the wood’s harsh tannins.

The barrels are then slowly toasted and heavily charred to further enhance the wood’s most desirable flavors. This meticulous process delivers a hand-crafted spirit with rich aromas of crème brûlée and spice cabinet, and decadent notes of rich caramel, dark chocolate, and vanilla bean on the palate with a sweet, lingering finish. The Port Finished expression takes their 5-year-old Straight Bourbon for another 6 months of finishing in ruby port barrels. This adds additional notes of candied cherries, dried fruit, berries, and chocolate to the already rich bourbon profile.

The bourbon has rich aromas of crème brûlée and spice cabinet, and decadent notes of rich caramel, and vanilla bean on the palate. These are joined by additional port-cask notes of candied cherries, dried fruit, berries, orange zest, and chocolate. Finishes long and sweet.