Caskers Rewards members earn up to 3 store points back when buying this bottle.
Size750mL Proof92.4 (46.2% ABV) each
Released as part of Woodford Reserve's Master's Collection, these limited-edition ryes were aged in new and used American oak casks for an average of seven to eight years.
Notify me when this product is back in stock. 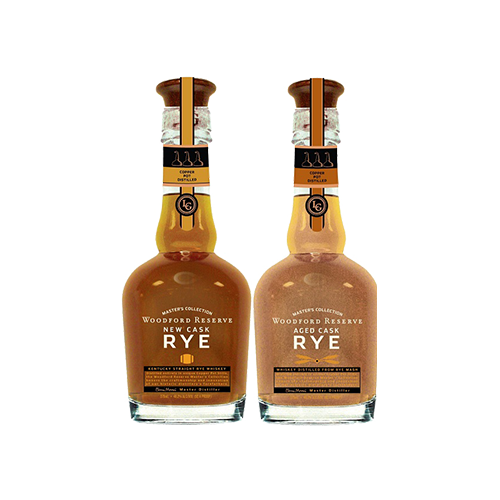 Woodford Reserve Master's Collection Aged Cask and New Cask Rye Whiskey were made from 100% rye grains. "This idea has a great tradition," says Morris. "Bartenders appreciate a rye whiskey, and I wanted to give it a try." Once the grains were harvested, they were mashed and fermented at the distillery in Versailles, Kentucky (100% rye mashbills are notoriously difficult to ferment). Then, the wash — the liquid that remains following fermentation — was triple distilled through Morris' copper-pot stills.

Following distillation, a portion of the whiskey was aged in new, American oak casks while the remainder was aged in American oak casks that had previously been used to mature Woodford Reserve Bourbon. After aging for an average of seven to eight years, each of these limited edition ryes was brought to proof and bottled separately.

Woodford Reserve New Cask Rye Whiskey has an aroma of brown sugar, caramel and a hint of spice. The aroma opens up to notes of cinnamon, woody spices and honey on the palate, and leads to a lingering, spicy finish that is noticeably warm.

Woodford Reserve Aged Cask Rye has a lighter color than New Cask Rye, along with an aroma of honey and molasses. The initial notes of brown sugar, toffee and milk chocolate are complemented by notes of burnt sugar and caramelized oranges, and lead to a smooth, soft finish.

New Cask: Aroma of brown sugar, caramel and a hint of spice. Notes of cinnamon, woody spices and honey on the palate, which leads to a lingering, spicy finish that is noticeably warm.