Size750mL Proof90 (45% ABV)
This Masterson’s whiskey is a classic rye with impeccable character, made from 100% Pacific Northwest Rye.
Notify me when this product is back in stock. 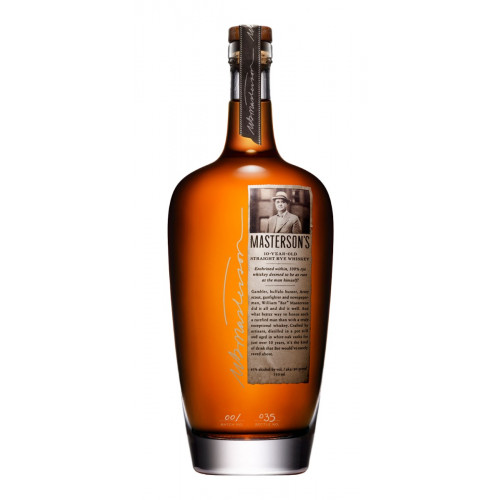 Born on November 26, 1853, William "Bat" Masterson left his family farm in Henryville as a teenager in order to become a buffalo hunter. After a few years hunting buffalo, Masterson became a scout for the United States Army. By the age of 24, he had moved to Kansas and was elected sheriff of Ford County.

In 1879, Bat was voted out of office and spent the next several years making a living as a professional gambler and saloon owner. During this time, Masterson was said to have avenged the deaths of his two brothers with the help of his famous revolver, which was nicknamed "the gun that tamed the West." By the time he passed away in 1921, Masterson had done it all, and done it all well.

Masterson’s is produced at Alberta Distillers in Canada, and owned by Deutsch Family Distillers. The brand gets its name from Bat Masterson, an American bastion of butch. This Masterson’s Rye is a classic whiskey with impeccable character, made from 100% Pacific Northwest Rye. Distilled in pot stills and aged a full ten years before being finished in 80% tight grain American oak barrels sourced from Quercus Alba in southern Missouri.

These Quercus Alba barrels were air-dried outdoors for at least two years, allowing the natural fungi (moss) on the barrels to grow yielding more vanillin. The result is a toasty vanilla flavor profile with baking spices and a rich and creamy mouth feel. This Masterson’s rye received the ‘2017 Canadian Whisky of the Year’ award.