Rating:
100%
1
Caskers Rewards members earn up to 3 store points back when buying this bottle.
Size750mL Proof90.4 (45.2% ABV)
This special batch of Double Oaked Barrel Woodford Reserve was bottled exclusively for Caskers. Only 240 bottles available!
Notify me when this product is back in stock. 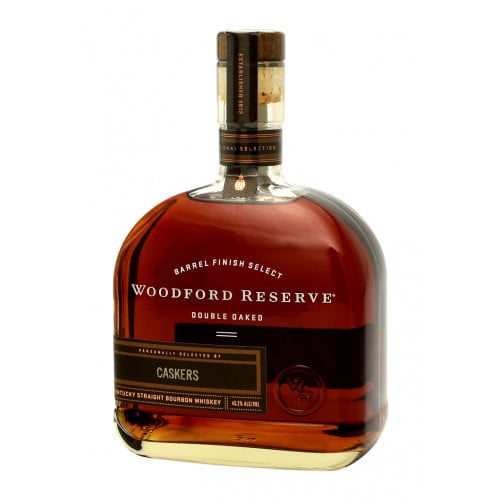 Woodford Reserve Double Oaked Bourbon takes Woodford Reserve's award-winning Distiller's Select bourbon and finishes it in a second heavily toasted and lightly charred barrel. The heavy toast from the bespoke cask contributes notes of honey, cream and vanilla to the bourbon, which are well-complemented by sweet aromatic notes contributed by the light char. “Double the maturation, double the wood exposure,” says Woodford Reserve Master Distiller Chris Morris. “That is the secret to the Double Oaked character. The second barrel tells the story.”

Woodford Reserve Double Oaked Bourbon has an aroma of cinnamon, vanilla and light chocolate, which leads to mellow notes of oak, baked apples, brown sugar and raisins on the palate. The flavors are subtle and tamer than expected, and lead to a long, sweet finish. The bourbon earned the Double Gold Medal at the San Francisco World Spirits Competition in 2013, and earned a score of 92 points from Wine Enthusiast.

The Woodford Reserve Distillery is among Kentucky's oldest and smallest bourbon distilleries. Nestled in the heart of the Commonwealth's thoroughbred country, it's the only place you'll find bourbon and horses maturing side by side. It's also the only spirits company in the world to own its own cooperage and crafts its own barrels, allowing for ultimate precision when creating the Double Oaked Barrel and its exact toast and char specifications. This special Double Oaked Barrel Woodford Reserve is a limited release of only 240 bottles, bottled exclusively for Caskers.

This bourbon is aromatic with soft and smooth with hints of sweet peach and apricot fruit, brightened with a touch of caramelized orange peel layered over freshly sawed oak.