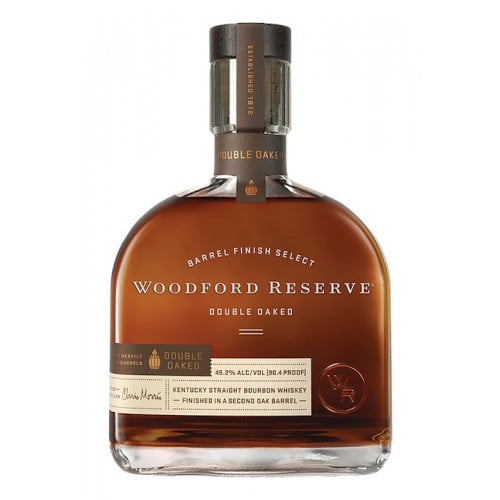 The Woodford Reserve Distillery sits on what was once an old Distillery founded by Elijah and his son, Oscar Pepper, in the 1800s. Under the stewardship of Oscar and Master Distiller James Crow, their distillery reformed and modernized the process of producing whiskey in the United States — the distillery revolutionized the concepts of sour mash and yeast propagation.

Nearly two centuries later, Chris Morris — Woodford Reserve's seventh master distiller — pays homage to Pepper and Crow with Woodford Reserve Double Oaked Bourbon. Morris, who began working at Woodford Reserve Distillery when he was just 16 years old, is one of the foremost experts in the production and maturation of bourbon and samples up to 180 unique whiskies each day. “It's about pursuing flavor through modernizing old practices,” says the 55 year-old master distiller.

Woodford Reserve Double Oaked Bourbon take's Woodford Reserve's award-winning Distiller's Select bourbon and finish ages it in a second heavily toasted and lightly charred barrel. The heavy toast from the bespoke cask contributes notes of honey, cream and vanilla to the bourbon, which are well-complemented by sweet aromatic notes contributed by the light char. “Double the maturation, double the wood exposure,” says Woodford Reserve Master Distiller Chris Morris. “That is the secret to the Double Oaked character. The second barrel tells the story.”

Woodford Reserve Double Oaked Bourbon has an aroma of cinnamon, vanilla and light chocolate, which leads to mellow notes of oak, baked apples, brown sugar and raisins on the palate. The flavors are subtle and tamer than expected, and lead to a long, sweet finish. The bourbon earned the Double Gold Medal at the San Francisco World Spirits Competition in 2013, and earned a score of 93 points from Wine Enthusiast.

The Woodford Reserve Distillery is among Kentucky's oldest and smallest bourbon distilleries. Nestled in the heart of the Commonwealth's thoroughbred country, it's the only place you'll find bourbon and horses maturing side by side. It's also the only spirits company in the world to own its own cooperage and crafts its own barrels, allowing for ultimate precision when creating the Double Oaked Barrel and its exact toast and char specifications.

"I guarantee you are going to love it," says Morris.

4.9 out of 5
(6 reviews)
Write a review
Real email address is required to social networks
Sign in
Login with Google
Login with Facebook
Or
We also recommend