Size750mL Proof86.4 (43.2% ABV)
Woodford Reserve's flagship bourbon is a rich and smooth spirit that has been garnering awards since 1999. This special edition features a 1L bottle adorned with a 2021 limited-edition holiday label, making it particularly giftable. 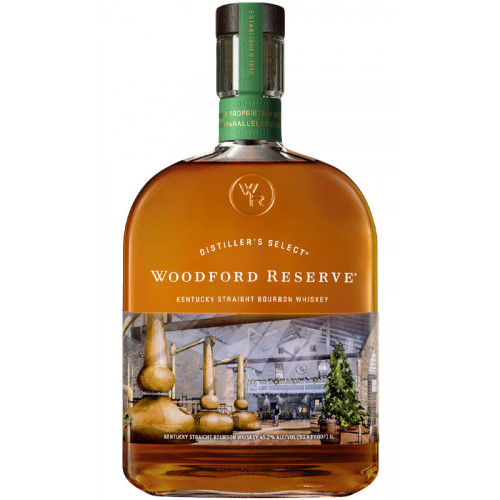 Nestled amid the rolling hills of bluegrass and thoroughbred farms sits one of Kentucky’s oldest and smallest distilleries. The iconic Woodford Reserve Distillery sits on the grounds of a National historic landmark. It is Kentucky’s oldest distilling site where the legendary Elijah Pepper began crafting whiskey in 1812, beginning a dynastic legacy in Kentucky Bourbon. It was on this same sacred soil that years later, Master Distiller James Christopher Crow developed his whiskey-making methods, alongside Oscar Pepper, “which today have become common practice, including the implementation of sour mash into fermentation.” Revolutionizing concepts of sour mash and yeast propagation, and modernizing the process of whiskey production in the US.

Produced under the Brown-Forman Corporation, Woodford Reserve Bourbons are premium spirits crafted in small batches and aged in new char oak barrels. This artisanal process allows them to “craft using all five sources of bourbon flavor, giving it its distinct taste and crisp, clean finish.” Woodford Reserve’s Distillery houses an impressive 500-foot-long gravity-fed barrel run, along with their iconic copper pot stills, and 100-year-old cypress wood fermenters. Their facility also has one of the only heat cycled barrelhouses in the world. An impressive mechanism that gives Woodford Reserve its color and signature flavor.

As the official bourbon of the Kentucky Derby, Woodford Reserve Distiller’s Select is “comprised of more than 200 detectable flavor notes, from bold grain and wood, to sweet aromatics, spice, and fruit & floral notes.” The smooth and decadent flagship bottling has been winning awards since 1999, with an exhaustive list of accolades that includes a winning streak of Gold and Double Gold Medals at the San Francisco World Spirits Competition for four consecutive years (2011-2014). This release of the acclaimed whiskey sports a special 2021 limited-edition holiday label that adorns the 1L bottle.

Grab this bottle with a limited-edition label today!

Clean, brilliant honey amber complexion, with notes of rich dried fruit, hints of mint and oranges covered with a dusting of cocoa, faint vanilla, and tobacco spice on the nose. The palate is rich, chewy, rounded, and smooth, with complex citrus, cinnamon, and cocoa. Toffee, caramel, chocolate, and spice notes abound. The finish is silky smooth, almost creamy at first with a long, warm satisfying tail.