Size750mL Proof125.8 (62.9% ABV)
This highly limited, high-octane offering from Woodford Reserve is hand-selected from a distinct group of barrels.
Notify me when this product is back in stock. 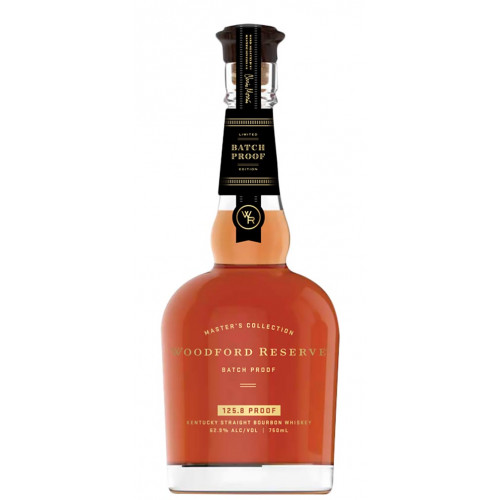 As a highly limited offering from Woodford Reserve, this Batch Proof is crafted using the same grain bill and process as Woodford Reserve Bourbon. This Master’s series emphasizes the alchemic nuances created by altering one of its five sources of flavor: water, grain, fermentation, distillation, and maturation.

Woodford Reserve Batch Proof bourbon takes the flavor range of sweet vanilla and toasted oak, that has become the Woodford Reserve trademark, to a whole new level. A straight bourbon whiskey from a select group of barrels, this limited edition, product of Woodford Reserve is bottled at 62.9% ABV.

A complex medley of wood spice notes including smoked cedar, dark chocolate, pineal, and vanilla are balanced with hints of orange zest, grilled pineapple and cherry fruit on the nose. This is followed by sweet marzipan, peppermint, and malt. The palate is full of dark chocolate drizzled over toasted almonds, hazelnuts and malty shortbread spiced with hints of leather, cedar, and nutmeg. On the finish are notes of richly aged leather spice and dark chocolate lead to a crisp dry finish.