Size750mL Proof90 (45% ABV)
Crafted in Salida, Colorado, this 90-proof gin uses neutral grain spirit in its recipe. It's a modern style gin with a London dry twist, as its selection of botanicals is influenced by the latter.
Notify me when this product is back in stock. 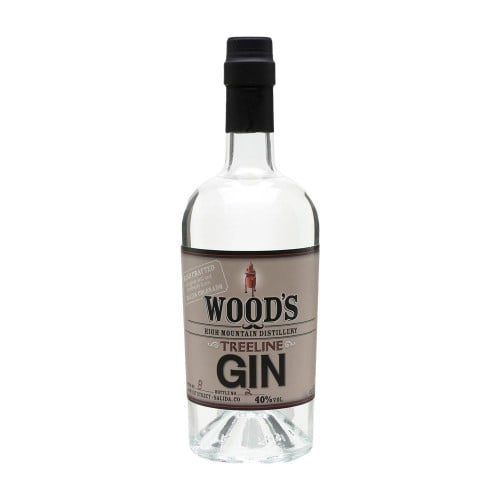 P.T. Wood was moved by the nature surrounding the Grand Canyon. The days spent rafting on the river and sharing a bottle of whiskey in the evenings, led to his decision to go into distilling. He moved to Salida, Colorado, and launched Wood's Distillery with his brother Lee ― that is after 2007, once the legislation was passed that allowed for small-scale distilling operations.

After plenty of studying, procuring equipment, and securing a suitable location, they acquired an antique German still from the 1880s named Ashley. Their small-batch distilling operation was good to go. In 2012 they opened the distillery and tasting room to the public. Wood's High Mountain Distillery was founded "with the goal to bottle their passion for outdoor adventures into spirits that shine with the essence of the mountains of Colorado." Now they craft several whiskey expressions, 3 gins, a vodka, and an elderflower liqueur to boot.

The Treeline Gin is a grain spirit with Colorado juniper. It's a modern style gin that takes its cues from London dry gin with its choice of botanicals. The Colorado gin, as they call it, is bottled at 90 proof and has a bright and crisp profile with notes of citrus, licorice, and pepper.

Grab a bottle of this Colorado gin today!

Bright and crisp, the gin opens with juniper and citrus aromas and floral undertones. The palate has juniper, citrus, licorice, and pepper notes that culminate in a refreshingly bright finish.