Size750mL Proof84 (42% ABV)
This impassioned take on an American gin is pot-distilled in small batches to articulate a deliberate blend of infused herbs, fruits, roots and flowers.
Notify me when this product is back in stock. 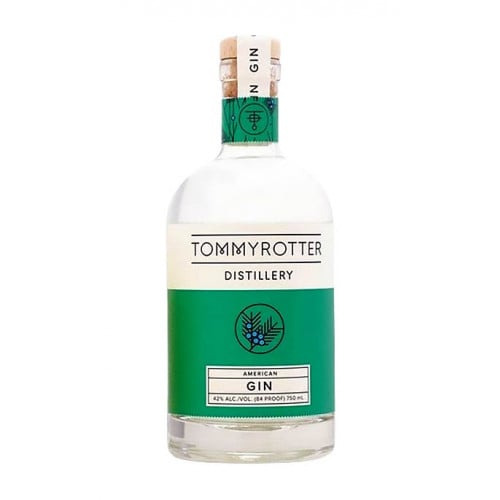 Founded in 2015 by Bobby Finan and Sean Insalaco, the industrial chic distillery opened its doors in July of 2015, in New York’s historic Hydraulics manufacturing district. The distillery is named after the Tommyrotters’ Club, which according to the distillery founders, were “a band of rebellious artisans in the early 20th century who broke rank from the Arts and Crafts Movement to create for creation’s sake. They sought adventure, mischief and inspiration in nature.”

Bobby Finan gravitated towards the craft-distilling scene in NYC, and in 2013 he got his first start in the industry at the Cooperstown Distillery. After relocating to his hometown Buffalo in 2014 he met business partner, Sean Insalaco, and by July 2015, Tommyrotter Distillery was up and running.

In the spring, summer and fall months, their multi-story distillery is open to visitors. Their beautiful modern glass-walled mezzanine tasting room gives a unique view of the entire production process. At Tommyrotters their production process is simple yet quite meticulous. No frills. No automation. Just handcrafted spirits, distilled batch by batch in small copper stills.

Their spirits are distilled from American farm-grown grains. Smaller stills allow for greater control over the distillation process. They fill and label every single bottle by hand. They currently have three award winning expressions in their lineup, one vodka and one American gin, and one barrel aged gin. Their gin is described as being simultaneously juniper and botanical rich. Infused with herbs spices, roots and flowers sourced from all over the world that are harmonized in the distiller’s secret recipe.

Their impassioned take on an American gin is Pot-distilled in small batches to articulate a deliberate blend of infused herbs, fruits, roots and flowers. “An ode to our craft, this is an independent gin” (Tommyrotter). Bottled at 42% ABV, it won a Silver Medal at the 2016 San Francisco World Spirits Competition.

Pick up a bottle of this gin today!

Bright and floral on the nose, with gentle spice and citrus, a hint of juniper, cinnamon and cardamom. The palate is clean and smooth with cardamom cassia and strong floral notes, coriander, and peppercorn. The finish is medium length, and filled will botanical notes.