Learn more
Size750mL Proof84 (42% ABV) *Please note that the ABV of this bottle may vary
Born of Jos. A. Magnus & Co's quest to make the perfect craft cocktail gin, this 84-proof expression does just that ― it makes delicious cocktails. Yet the award-winning London-style gin proves to be a delicious sipper on its own as well.
Notify me when this product is back in stock.

This product is available in: DC, MI Unfortunately, we can't ship to PO Boxes and APO addresses. 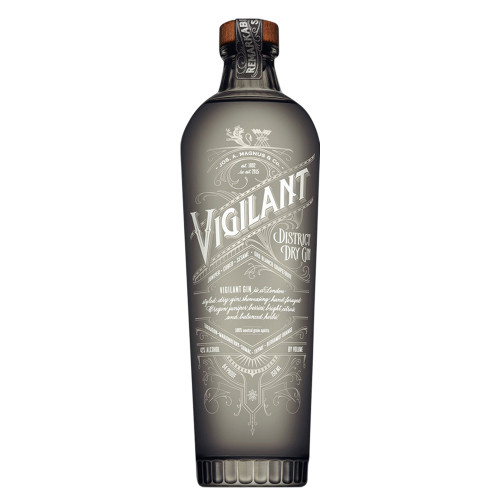 Their several bourbon expressions including Joseph Magnus Bourbon, Murray Hill Club, and Cigar Blend Bourbon have racked up countless prestigious awards and gathered quite a fan base. The company then embarked on a quest to make the perfect cocktail gin, arriving at 2 expressions: the Vigilant District Dry Gin and the Vigilant Navy Strength Gin. The Dry Gin is a London-style gin that is bold, fresh, and spicy with minty juniper, sweet marionberry, oro blanco grapefruit, and bergamot orange. It has won a Silver Medal at the San Francisco World Spirits Competition 3 years in a row: in 2016, 2017, and 2018.

Get your bottle of this award-winning gin today!

The nose opens with juniper, citrus, herbs, and coriander. You'll find more juniper and citrus zest on the palate, culminating in a long finish with a touch of spice.