Size500mL Proof92 (46% ABV)
Distilled from Norwegian potato liquor, the base of this gin is comprised of Røros juniper, Nordmarka blueberries, anise, Oppdal angelica, Grimstad rhubarb, seaweed, wild Sunndal marjoram, and 16 other Norse herbs.
Notify me when this product is back in stock. 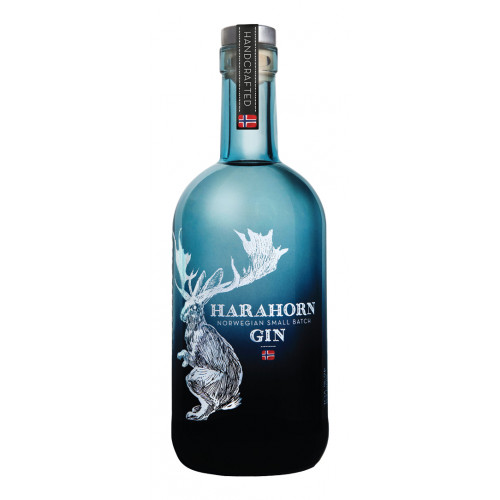 Det Norske Brenneri, or "The Norwegian Distillery" as it is known in English, is situated in the town of Grimstad in the southern part of Norway. This is the first private distillery in Norway since the government dissolved the state monopoly on Spirits-making in 2005. Since then they have been producing various types of spirit including apple brandies, aquavits, gins and whiskies. They utilize traditional techniques and handraft their spirit in small batches. They produce up to 300 liters at a time. This Norweigian distillery only uses local Norwegian berries and herbs, which have a very distinctive flavor profile due to the dynamic climate.

Harahorn Gin gets its name from a mountain in Hemsedal, one of the most pristine mountainous areas. The label features the mystical lepus cornutus, a giant rabbit with deer antlers. Distilled from Norwegian potato liquor, the base of this gin is comprised of Røros juniper, Nordmarka blueberries, anise, Oppdal angelica, Grimstad rhubarb, seaweed, wild Sunndal marjoram, and 16 other Norse herbs. Harahorn Gin earned the 2019 USA Spirits Ratings award for the Gin of the Year.