Size750mL Proof92 (46% ABV)
This is a lightly peated version of Wolfburn signature Highland Single Malt. Adored for its smoky nose with hints of fruit and fresh sea air.
Notify me when this product is back in stock. 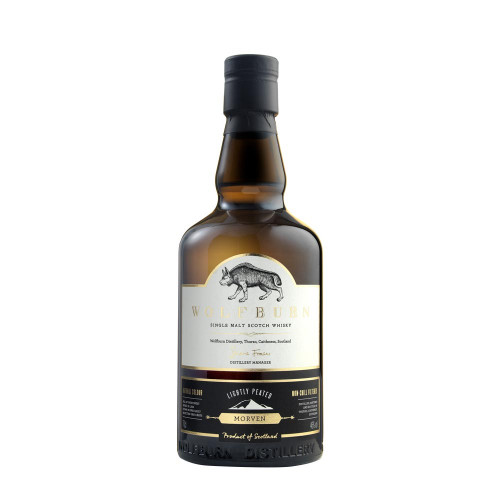 After 150 years of neglect, a group of private investors stumbled upon the old Wolfburn Distillery in May, 2011 — seeing massive potential, the investor began to rebuild the distillery from the ground up. The new Wolfburn Distillery, which, by law, must use water sourced from the same steam used centuries ago, is crafting unpeated malt whisky from a blank canvas through old-fashioned pot-still distillation; no automation, no rush and a lot of care.

Released in 2017, Wolfburn Morven is a lightly peated version of Wolfburn signature Highland Single Malt. Made from malted barley that was infused with smoke during the drying process, gently distilled and matured in Wolfburn warehouses, this is a smooth and well-rounded whisky. Non chill-filtered and bottled at 92 proof, it offers a smoky nose with hints of fruit and fresh sea air. The palate is full of floral notes, raisins, and light spices with sweet honey flavors developing on the finish.

The nose is smoky with hints of fruit and fresh sea air. The palate is full of floral notes, raisins, and light spices with sweet honey flavors developing on the long and smooth finish.