Caskers Rewards members earn up to 4 store points back when buying this bottle.
Size750mL Proof92 (46% ABV)
This festive single malt Scotch whisky makes a perfect Christmas gift. It has spent 6 years in a combination of first-fill oloroso sherry casks and bourbon barrels, resulting in a smooth and sweet expression that's brimming with Christmas cake notes.
Notify me when this product is back in stock. 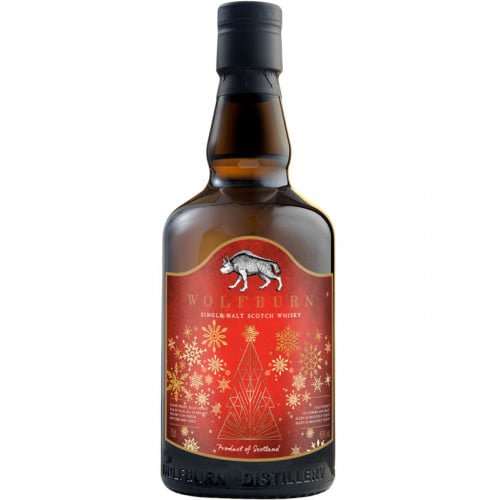 After 150 years of neglect, a group of private investors stumbled upon the old Wolfburn Distillery in May, 2011 — seeing massive potential, the investor began to rebuild the distillery from the ground up. The new Wolfburn Distillery, which, by law, must use water sourced from the same steam used centuries ago, is crafting unpeated malt whisky from a blank canvas through old-fashioned pot-still distillation; no automation, no rush, and a lot of care.

Wolfburn Christmas Special 2021 is a showcase of the distillery's signature smooth and easy-drinking style. It's a festive single malt Scotch that is immensely giftable to boot. It has spent 6 years in a combination of first-fill oloroso sherry casks and bourbon barrels, resulting in a deliciously sweet 92-proof expression with festive notes of raisins, dates, dark chocolate, vanilla, and ginger.

Get your bottle of this festive single malt today!

The nose opens with a sherried sweetness, heather honey, malt, dried fruit, and butterscotch aromas. On the palate, you'll find raisins, dates, sherry, dark chocolate, and hazelnut, slowly giving way to vanilla, spice, and ginger. The finish is sweet with caramel and floral notes, as well as lingering honey and melon.