Learn more
Size750mL Proof120 (60% ABV) *Please note that the ABV of this bottle may vary
Bottled at cask strength, this single malt whisky was rated one of the Top 5 Single Malt Scotches by Wine Enthusiast. 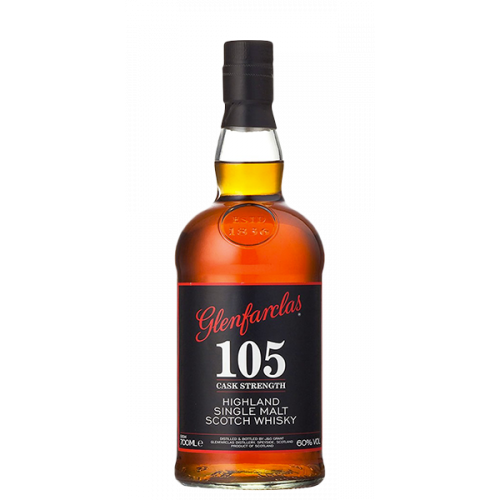 Situated on the Recherlich Farm in the Speyside region of Scotland, Glenfarclas Distillery was founded in 1836 by Robert Hay, a tenant farmer. In 1865, Hay sold the distillery to John Grant for £511. Grant was a cattle breeder at the time, and was looking for a staging post between his farm in Glenlivet and the commercial market situated in Elgin.

When Grant passed away in 1889, he left the estate to his son George. George died shortly thereafter and his children, also named George and John Grant, took control of the distillery. After saving the distillery from the brink of bankruptcy, the Grant Brothers modernized and expanded operations at the distillery such that in May 1912, a rival distiller wrote "of all the whiskies, malt is king — of all the kings, Glenfarclas reigns supreme." Today, George S. Grant — the great-great-great grandson of a cattle farmer — represents the sixth generation of Grants that own and manage the Glenfarclas Distillery, one of the last remaining independent distilleries in Scotland.

Glenfarclas Single Malt Scotch Whisky is made from freshly harvested barley, which is malted and mashed with water sourced from the heather-clad slopes of the Ben Rinnes Mountain. The crystal-clear spring water, which cascades down the 3,000-foot mountain through peat and granite, is the lifeblood of the Glenfarclas Distillery. After the barley has been malted and mashed, it is fermented using a proprietary yeast culture.

The wash — the liquid that remains after fermentation — is then distilled twice through Glenfarclas' copper-pot stills. While most distilleries use modern, steam-powered stills that lengthen the lifespan of the still, Glenfarclas Distillery continues to use traditional direct-heated stills in order to preserve the classic flavors of the Scotch whisky. After distillation, the heads and tails of the distillate are discarded and the whisky is matured until it has reached its peak flavor.

Glenfarclas 105 Highland Single Malt Scotch Whisky was initially developed in 1968 by George S. Grant, who decided to bottle a barrel of Glenfarclas Whisky at cask strength as a Christmas gift for family and friends. Today, the whisky represents one of the most classic and elegant Glenfarclas labels, and continues to be bottled at cask strength. It has a deep, golden color, along with an aroma of apples, pears and dark coffee. With a touch of water, the aroma fades into notes of rich spices, oak and sherry on the palate, and leads to a long, smooth finish with a lingering smoky flavor.

Glenfarclas 105 was rated one of the Top 5 Single Malt Scotches by Wine Enthusiast, which gave it a score of 95 points and said that it had an "almost bourbon-like beauty. "In addition, it was said to be a "Best Bang For Your Buck" by Malt Maniacs.

Deep, golden color. Add a touch of water to get aroma of apples, pears and dark coffee. Notes of rich spices, oak and sherry on the palate. Long, smooth finish with a lingering smoky flavor.