Size750mL Proof112.2 (56.1% ABV)
This release brings Wild Turkey's rye into their family of barrel-proof spirits. Bottled at 112.2, the permanent addition to their lineup is a bold whiskey with a perfect balance of spice and sweetness.
Notify me when this product is back in stock. 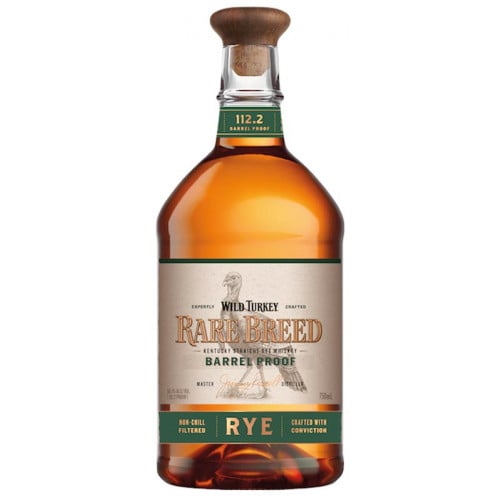 Wild Turkey's Rare Breed releases have turned out to be some of the tastiest they've put out with countless fans and awards to prove it: several Double Gold Medals at the San Francisco World Spirits Competition, Gold Medals at the International Wine & Spirits Competition, and numerous others. The rye whiskey is bottled at 112.2 proof and brings a rye recipe to the family of Wild Turkey's delicious barrel-proof releases. Non-chill filtered and uncut, this super-premium expression is bold, complex, and unrestrained.

Super-balanced, this rye opens with plenty of spice in the form of pepper and cinnamon, as well as honey, oak, and citrus on the nose. Creamy on the palate, there's vanilla, lemon zest, and cereal notes with a pleasant balance of sweetness and spice. Finishes long and satisfyingly spicy with a touch of citrus.