Size750mL Proof116.8 (58.4% ABV) - May vary
A marriage of six, eight and twelve-year old bourbons, this bourbon earned the Double Gold Medal at the San Francisco World Spirits Competition in 2013.
Notify me when this product is back in stock. 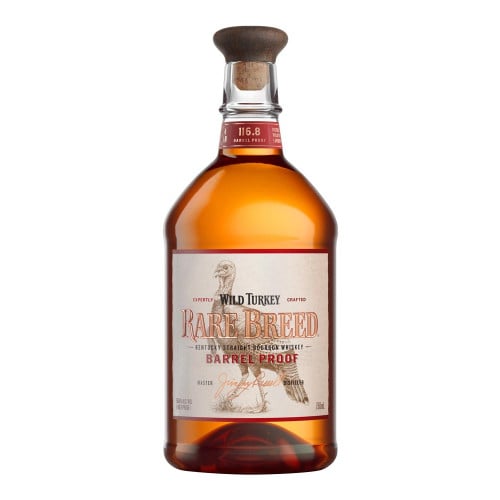 Situated along the banks of the Kentucky River, the Ripy Brothers Distillery was founded in 1869 by James and Thomas Ripy. Nearly a century later, a distillery employee named Thomas McCarthy took a supply of Ripy Brothers Bourbon on a wild turkey hunting trip with a group of friends, and the following year, the distillery was renamed Wild Turkey.

Wild Turkey Rare Breed Kentucky Straight Bourbon Whiskey is made from a mash of approximately 75% corn, 13% rye and 12% malted barley, all of which are non-genetically modified. Once the grains have been harvested, they are milled and mashed with limestone-rich water drawn from the Kentucky River before being fermented and twice distilled.

After the casks have matured under the intense Kentucky sun, Jimmy Russell — Wild Turkey's master distiller — marries together a unique blend of bourbon that has matured for a minimum of six, eight and twelve years. Once the bourbons have been married together, they are bottled at cask strength.

Wild Turkey Rare Breed Kentucky Straight Bourbon has a deep, auburn color, with an aroma of orange zest, mint and sweet tobacco. The aroma gives way to notes of leather, figs and dates on the palate, which are well-balanced by touches of roasted nuts, nutmeg, vanilla and honeyed oak. The finish, which is long and robust, has a sweet touch of caramel and creamy vanilla. The bourbon earned a score of 93 points from the Beverage Tasting Institute in 2013, and earned the Double Gold Medal at the San Francisco World Spirits Competition in 2013.

"It's a good combination of deep bourbon whiskeys with very spicy flavors," says Harlen Wheatley, master distiller at rival Buffalo Trace, of Wild Turkey Rare Breed. "It is a strong drink that goes well with anything, which is the way I like bourbon to be."

Pick up a strong bourbon today!

Deep, auburn color, with an aroma of orange zest, mint and sweet tobacco. Notes of leather, figs and dates on the palate, which are well-balanced by touches of roasted nuts, nutmeg, vanilla, and honeyed oak. Long, robust finish with touches of sweet caramel and creamy vanilla.