Size750mL Proof101 (50.5% ABV)
This bourbon combines Master Distiller Jimmy Russell's love of mid-aged bourbon with his son's passion for older whiskey. Crafted with hand-selected bourbons aged between 9 and 14 years, it's finished in casks that were both toasted and charred.
Notify me when this product is back in stock. 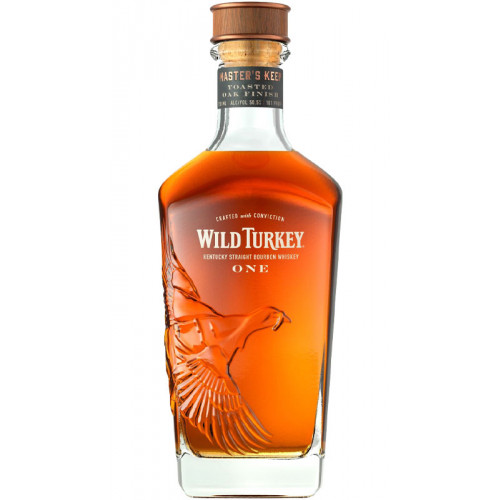 Today, Wild Turkey Distillery is stewarded by Master Distiller Jimmy Russell and his son Eddie Russell (together, the pair have over 90 years of experience producing bourbon). "I was born and raised in Lawrenceburg, Kentucky," says Jimmy, "which was a small community when I was growing up, but there were four bourbon distilleries here, and you had families working all the distilleries. You wanted to get in the business. My grandfather and my father, me, and now my son, we've all been in the business.” Famous for the bold and spicy flavors the duo's higher-rye recipe and lower barrel entry proof produces, Wild Turkey uses only the best ingredients, which included 100% American grown non-GMO grains and limestone-filtered water from the Kentucky River.

The premium Wild Turkey Master's Keep series features their oldest whiskey. Master's Keep One combines Jimmy's love of mid-aged bourbon with his son's passion for older whiskey. It's a combination of hand-selected bourbons aged between 9 and 10 years with a small batch of 14-year-old whiskey. The resulting blend was then finished in new oak casks that had been both toasted and charred, giving the 101-proof expression a unique touch.

It's a bold whiskey with a sweet nose of caramel, baked apple, honey, oak, and a touch of dark chocolate. The palate has toasted oak, toffee, vanilla, orange zest, and a pleasant sweetness with some gentle spice notes. The finish is medium and pleasantly warming with spice and wood.