Size750mL Proof86.8 (43.4% ABV)
This newly released seventeen year old bourbon is the oldest ever released by Wild Turkey.
Notify me when this product is back in stock. 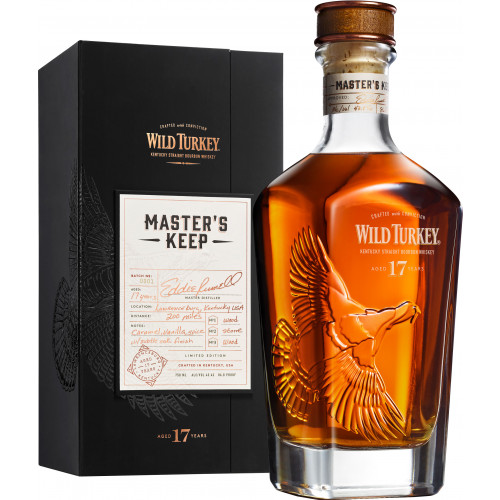 Following the end of the American Civil War, the Ripy Brothers returned to their native state of Kentucky and together, opened a distillery on the slopes of a hill in Lawrenceburg. The distillery operated continuously for nearly fifty years until the 18th Amendment, which prohibited the sale of alcohol in the United States, was ratified. Following the end of Prohibition, the Ripy Brothers Distillery was reopened and a distillery executive named Thomas McCarthy took samples of maturing whiskey from the distillery on a turkey hunt with a group of friends. The next year, his friends asked him to bring “some of that wild turkey whiskey” on their next hunt, giving birth to the distillery’s new name.

Today, Wild Turkey Distillery is stewarded by Master Distiller Jimmy Russell and his son Eddie Russell (together, the pair have over 90 years of experience producing bourbon). “I was born and raised in Lawrenceburg, Kentucky,” says Jimmy, “which was a small community when I was growing up, but there were four bourbon distilleries here, and you had families working all the distilleries. You wanted to get in the business. My grandfather and my father, me, and now my son, we’ve all been in the business.”

Wild Turkey Master’s Keep 17 Year Old Kentucky Straight Bourbon Whiskey is the oldest whiskey ever released by Wild Turkey, and the first to be released since Eddie Russell joined his father as Master Distiller earlier in 2015. Distilled in 1997, when Wild Turkey encountered a surplus of bourbon and shortage of space, Eddie decided to move the bourbon that would become Master’s Keep to a stone warehouse 200 miles away. After 17 years, Eddie believed the barrels had reached their peak flavor, and transported them back to Wild Turkey’s wooden warehouses before bottling them. Interestingly, the bourbon had fallen to 86.8 proof, the cask strength at which it was then bottled.

“Master’s Keep is the result of a lot of experimentation, patience and faith,” says Eddie Russell.

This tremendous bourbon won’t last long — be sure to pick up a bottle today!