This product is available in: AZ, NV Unfortunately, we can't ship to PO Boxes and APO addresses.

Size750mL Proof101 (50.5% ABV)
Aged for eight to ten years, this Bourbon was named one of the ten best Bourbons in the country.
Notify me when this product is back in stock.

This product is available in: AZ, NV Unfortunately, we can't ship to PO Boxes and APO addresses. 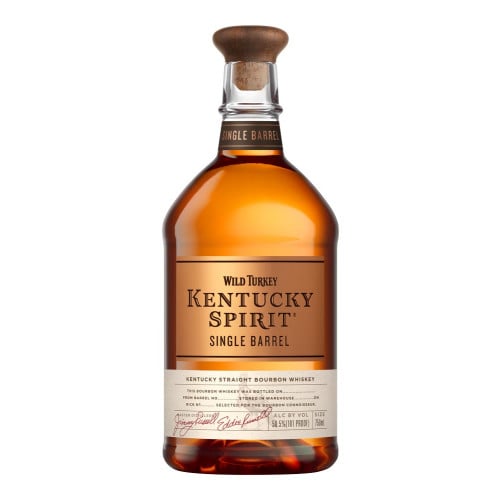 Wild Turkey Kentucky Spirit Single Barrel Bourbon Whiskey is crafted from a mash of 75% corn, 13% rye, and 12% malt barley. Once the grains arrive at the distillery, they are milled and mashed before being fermented and distilled through Wild Turkey's copper pot stills.

Following distillation, the bourbon is aged in American oak casks that have been charred with a #4 char. Then, Jimmy Russell personally selects casks that have matured for approximately nine years to be bottled individually. As a result of being bottled from a single cask as opposed to a batch of barrels, each bottle of Wild Turkey Kentucky Spirit Single Barrel Bourbon Whiskey is completely unique and entirely interesting.

Wild Turkey Kentucky Spirit Single Barrel Bourbon Whiskey has hints of tobacco, honey and caramel on the nose. Full-bodied notes of nutmeg, citrus, brown sugar and leather dominate the palate, and lead to a finish accented by hints of vanilla, mint and pepper.

The bourbon earned a score of 96-100 points from Wine Enthusiast and the Double Gold Medal from the San Francisco World Spirits Competition. In addition, it was named one of the ten best bourbons by Gayot.