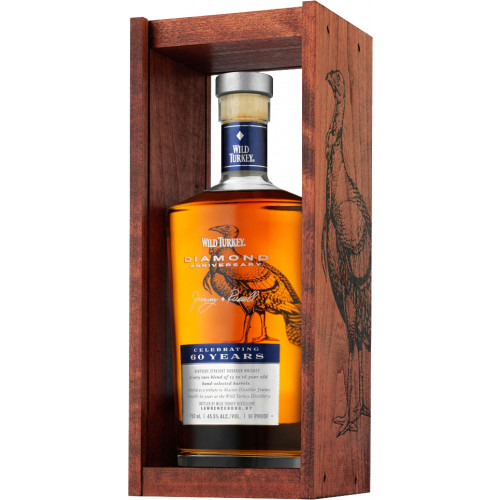 Following the end of the American Civil War, the Ripy Brothers returned to their native state of Kentucky and together, opened a distillery on the slopes of a hill in Lawrenceburg. The distillery operated continuously for nearly fifty years until the 18th Amendment, which prohibited the sale of alcohol in the United States, was ratified. Following the end of Prohibition, the Ripy Brothers Distillery was reopened and a distillery executive named Thomas McCarthy took samples of maturing whiskey from the distillery on a turkey hunt with a group of friends. The next year, his friends asked him to bring “some of that wild turkey whiskey” on their next hunt, giving birth to the distillery’s new name.

Today, Wild Turkey Distillery is stewarded by Master Distiller Jimmy Russell and his son Eddie Russell (together, the pair have over 90 years of experience producing bourbon). “I was born and raised in Lawrenceburg, Kentucky,” says Jimmy, “which was a small community when I was growing up, but there were four bourbon distilleries here, and you had families working all the distilleries. You wanted to get in the business. My grandfather and my father, me, and now my son, we’ve all been in the business.”

Wild Turkey Diamond Anniversary Edition Bourbon Whiskey pays homage to Jimmy Russell’s 60 years of employment at Wild Turkey Distillery (his diamond anniversary). The bourbon is a blend of bourbons that have been matured for 13 years and 16 years. “It was about doing something different,” says Eddie Russell, who helped select the blend. Wild Turkey Diamond has an aroma of oak, heathered smoke, and oranges that gives way to notes of cinnamon, baking spices, honey and caramel on the palate. Hints of orange zest, vanilla, butter, whipped cream and wood spices round out the finish.

The bourbon earned a score of 97 points from Wine Enthusiast. Pick up a bottle today!

Aroma of oak, heathered smoke, and oranges that gives way to notes of cinnamon, baking spices, honey and caramel on the palate. Hints of orange zest, vanilla, butter, whipped cream and wood spices round out the finish.