Size750mL Proof91 (45.5% ABV)
This Brooklyn rye from Red Hook is non-chill filtered to ensure the whiskey flavor remains unadulterated before being cut to proof with the hard-yet-sweet limestone mineral water from the legendary Mines of Rosendale, NY.
Notify me when this product is back in stock. 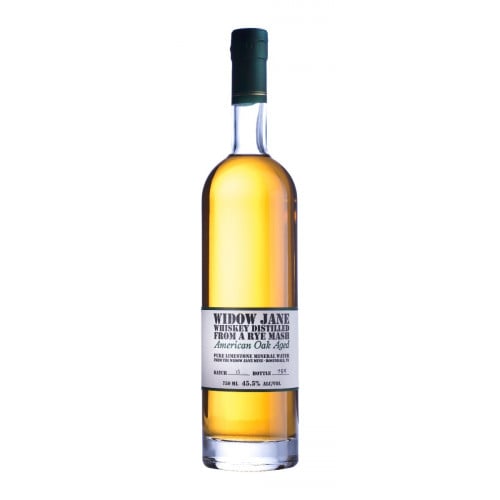 As great whiskey makers throughout the world from Kentucky to Scotland have long known, it takes sweet water from tough rock to make great whiskey. And, that’s what Widow Jane Whiskey is all about.

When the Widow Jane team set out to produce their whiskey they strived to offer something truly flavor forward, something bold and rich with character but most importantly had a taste of New York in each sip. All Widow Jane whiskey is cut to proof with pure limestone mineral water from the legendary Rosendale Mines of NY, just 100 miles north from Red Hook in Brooklyn, which Widow Jane calls home. It was limestone from this mine which was used to build the foundation of some of New York’s greatest structures: the gargantuan caissons of the Brooklyn Bridge, the Empire State Building and the 27,000-ton pedestal to the Statue of Liberty.

This water is integral to their whiskey as a signature ingredient. And the legend surrounding these mines is what gives Widow Jane whiskey its name. Both urban & urbane, Widow Jane is New York’s very own. The signature whiskey of the world’s most magnificent and maddening metropolis.

This rye has sweet, grassy, and floral notes as soon as it comes off the still. The traditional “spicy” character comes from its rest in the barrel. To lightly oak and round out the rye distillate, fresh cut oak staves placed inside once-used 10-year bourbon barrels. The result is a light, tropical “summer” rye that makes for some great cocktails. An excellent bitter or a splash of vermouth or ginger beer goes a long way.

This Brooklyn rye from Red Hook is non-chill filtered to ensure the whiskey flavor remains unadulterated before being cut to proof with the hard-yet-sweet limestone mineral water from the legendary Mines of Rosendale, NY.

A true New York City whiskey, evocative both of one of mankind’s greatest achievements — New York City’s skyline — and Brooklyn’s artisanal, craft spirits movement. Both urban and urbane, Widow Jane Rye is New York's very own — a signature whiskey of the world's most magnificent and maddening metropolis.

Pick up your Widow Jane today!