This product is available in: FL, IL, NY Unfortunately, we can't ship to PO Boxes and APO addresses.

Size750mL Proof94 (47% ABV)
This rye whiskey from Jack Daniel Distillery is crafted from a brand-new mashbill, and is limited to only 8,000 cases.
Notify me when this product is back in stock.

This product is available in: FL, IL, NY Unfortunately, we can't ship to PO Boxes and APO addresses. 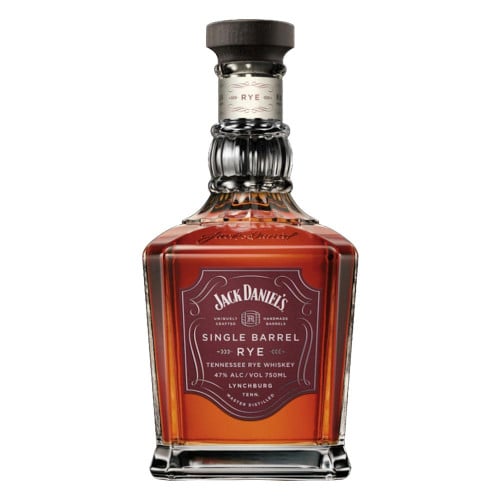 Jack Daniel Distillery Single Barrel Rye Whiskey is crafted from a batch of 70% rye, 18% corn and 12% malted barley (this mashbill is the first new mashbill used at the Jack Daniel Distillery Distillery in over a century). Once the ingredients have been mashed, they are fermented with a proprietary strain of yeast and iron-free cave spring water. Following fermentation, the wash is distilled and the resulting whiskey is then charcoal mellowed through 10 feet of sugar maple. This filtering process, known as the Lincoln County Process, earns the whiskey the title of “Tennessee Whiskey” and imparts a signature, sweet yet smoky flavor profile.

Once the whiskey has been charcoal filtered, it is matured for several years in toasted and charred new American White Oak barrels stored in the uppermost locations at the Jack Daniel Distillery warehouses. The higher the barrels are positioned, the hotter the temperature, and therefore the more opportunity the whiskey has to interact with the oak.

Bottled at 94 proof, Jack Daniel Distillery Single Barrel Rye Whiskey has an aroma of apples, plums and ripe fruit mingled with charred oak. Notes of butterscotch and caramel on the palate give way to a pleasant, peppery spice, which fades on the finish to reveal notes of vanilla bean and fresh maple.

In its first year, only 8,000 cases of Jack Daniel Distillery Single Barrel Rye Whiskey will be released worldwide.

Pick up a bottle of limited edition Jack today!

Aroma of apples, plums and ripe fruit mingled with charred oak. Notes of butterscotch and caramel on the palate give way to a pleasant, peppery spice, which fades on the finish to reveal notes of vanilla bean and fresh maple.