Rating:
90%
(2)
This special WhistlePig release was one of Dave Pickerell’s final creations: a dream to create the best aged Rye Whiskey perfect for any rye cocktail.
$49.99
Add to Wish List

In 2006, a band of dedicated Rye enthusiasts purchased a 500-acre dairy farm in the rolling hills of Vermont's Champlain Valley. Just until recently, until his passing the WhistlePig farm had been home to Master Distiller Dave Pickerell.

After he graduated from West Point with a Bachelor's degree in Chemistry, Pickerell served in the military for eleven years as a cavalry officer. Later he received a Master's degree in Chemical Engineering from the University of Louisville, before serving as chairman of the Kentucky Distillers Association and master distiller at Maker's Mark in Loretto, Kentucky for 13 years. "This is what I was meant for," said Pickerell of the whiskey business.

After leaving Maker's Mark, Pickerell embarked on a journey to find the perfect rye whiskey. "Rye, in its own essence, is just a brilliant grain... I wanted to do rye because it's America's historical whiskey." During the Revolutionary War, English blockades of American ports prevented the colonists from purchasing molasses used to make rum. As a result, American distillers, including George Washington, started making rye whiskey.

This stunning 100% rye is one of the final expressions created by late Master Distiller and whiskey luminary Dave Pickerell. His dream was to create the best aged Rye Whiskey perfect for any rye cocktail. PiggyBack has an intensely powerful, spicy profile, imparted by its time in oak barrels. You can expect complex and smooth notes that shine through, yet don’t overpower your drink. An outstanding in any concoction. Aged 6 years and bottled at 96.56 proof (’56 is the year Dave Pickerell was born).

Fresh cinnamon, cinnamon, freshly ground black pepper and subtle citrus and grapefruit zest on the nose. The palate is powerfully spicy with accents of cocoa, cardamom and treated leather. The finish is intense and lingering with notes of vanilla, citrus and baking spice. 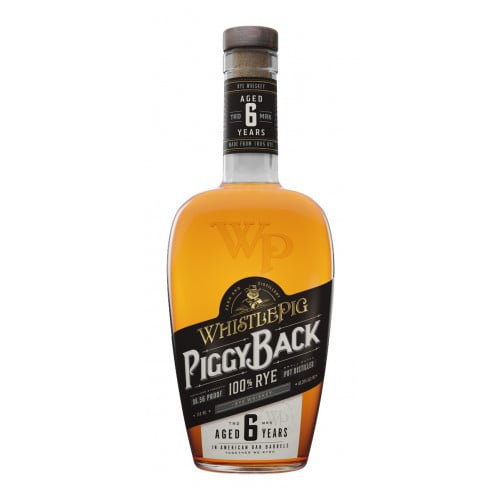