WhistlePig The Boss Hog Vth Edition: "The Spirit of Mauve"

Size750mL Proof116.8 (58.4% ABV)
Meet the highly anticipated Vth Edition of Boss Hog: The Spirit Of Mauve. This incredible 13-year-old straight rye is finished in Calvados Casks in honor of Mauves undying love of apples.
Notify me when this product is back in stock. 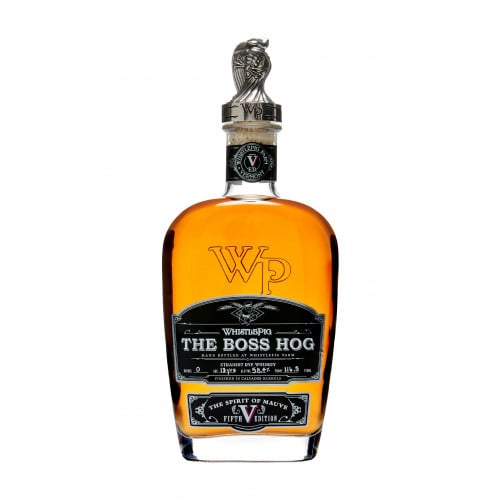 About WhistlePig The Boss Hog Vth Edition: "The Spirit of Mauve"

This Vth Edition, The Spirit Of Mauve, is a celebration of Mauve, one of our founding celebrity pigs. Mauve’s lover, Mortimer, was tragically killed defending her honor in 2014 and was memorialized in The Boss Hog, IInd Edition, The Spirit Of Mortimer. Mauve heroically persevered for the sake of their son, Mortimer Jr, but sadly joined Mortimer in heaven this Valentines Day. The pain of a broken heart can prove too much for even the strongest of pigs. The Spirit Of Mauve is a 13 Year Straight Rye Whiskey finished in Calvados Casks in honor of Mauves undying love of apples. The result is extraordinary. A fine balance between American power and French sophistication. There’s nothing else like it.

Mulled cider with cardamom aromas opens up to notes of candied ginger and a touch of pipe tobacco. A lovely caramel and vanilla nuance develops with time in the glass, and water wakens a gentle rye spice. On the palate are notes of maple syrup and pears, balanced by dark chocolate and a lingering French oak spice. The finish is lingering with a touch of charred oak and caramel, and maple syrup as the finish fades.