Learn more
Size750mL Proof104.8 (52.4% ABV) May vary *Please note that the ABV of this bottle may vary
Continuing WhistlePig's series of exploration, this straight rye whiskey is finished in single island Philippine rum casks that impart the spirit with warm spice and tropical notes. It's a complex & powerful whiskey that is bottled at barrel strength.
Notify me when this product is back in stock.

This product is available in: AZ, DC, NY Unfortunately, we can't ship to PO Boxes and APO addresses. 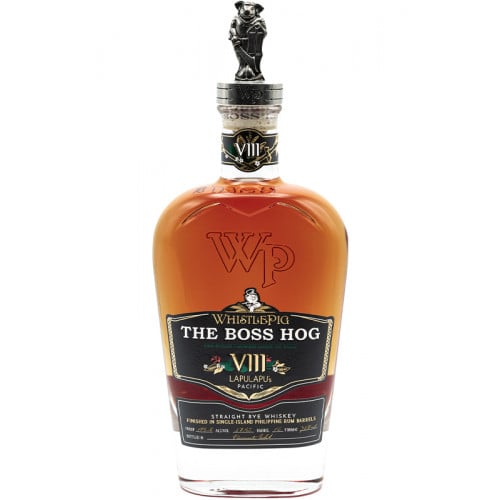 The Boss Hog VIII Lapulapu's Pacific is a straight rye whiskey and the latest product of WhistlePig's quest for the finest rye whiskey. Lapulapu was an indigenous ruler in the Philippines responsible for defeating Ferdinand Magellan, thus ending his voyage of circumnavigation in 1521. Legend has it that Lapulapu was turned to stone instead of dying and you can find a pewter effigy of the Filipino hero atop each bottle of The Boss Hog VIII. The whiskey is aged in American oak, then finished in single-island Philippine rum casks for a unique, complex, and powerful expression that is bottled at barrel strength.

Grab a bottle of this unique straight rye today!

The unique and powerful straight rye features a complex profile with aromas of vanilla, tropical notes, lemon, and molasses on the nose. The palate has cinnamon, citrus peel, butterscotch, and hints of toffee. The long and complex finish has leather, caramel, nutmeg, allspice, and lingering black pepper.