Size750mL Proof120.6 (60.3% ABV) - May vary
Only 50 barrels of WhistlePig Boss Hog "The Independent", which was bottled at cask strength from a single barrel, have ever been produced.
Notify me when this product is back in stock. 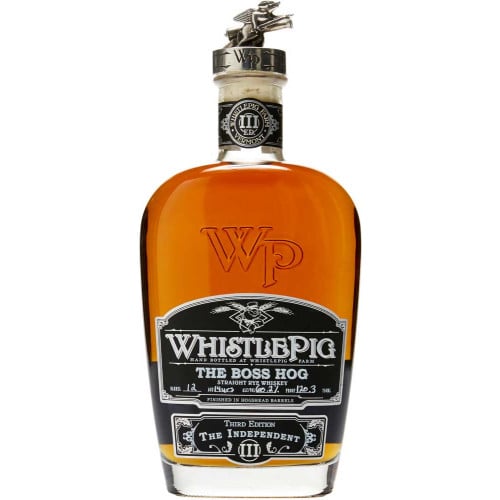 About WhistlePig The Boss Hog III: The Independent

WhistlePig The Boss Hog III: The Independent is a limited-edition companion to the original WhistlePig Straight Rye Whiskey and is also crafted from 100% rye grains. After the rye is distilled, WhistlePig Boss Hog is aged in a combination of new American oak and second-use bourbon casks for over thirteen years. The maturation process tames the intense notes of the rye with soft hints of vanilla, caramel and butterscotch. After maturation, each bottle of WhistlePig The Boss Hog is bottled from a single barrel at barrel strength (the whisky is not diluted with water).

Each bottle of WhistlePig The Boss Hog III: The Independent is the product of a single barrel, and only 50 barrels of this whiskey have ever been bottled.

Pick up a bottle of this amazing rye whiskey today!