Size750mL Proof90 (45% ABV)
This very mature straight rye whiskey pays tribute to the Sazerac name. Aged 18 years in new charred oak barrels and bottled at 90 proof, it's an oaky, yet well-balanced spirit with just the right amount of spice. 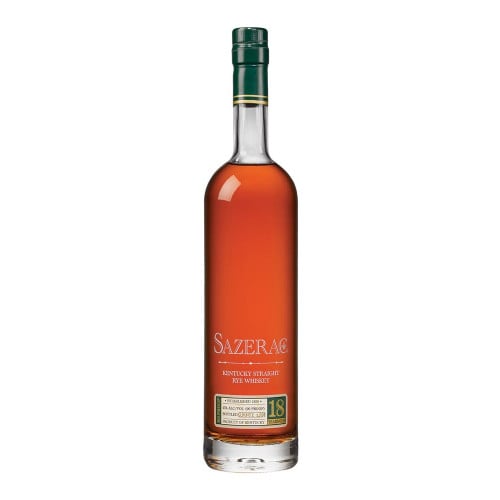 In 1838, a Creole immigrant named Antoine Peychaud opened the doors to a pharmacy on Royal Street in the French Quarter of New Orleans. While Peychaud was an apothecary by trade, he was also a natural mixologist. He would often invite friends over to his pharmacy after it had closed and mix drinks for them, including a drink he crafted from brandy, absinthe, and a proprietary blend of bitters. Peychaud's cocktail became wildly popular throughout New Orleans. In 1850, Sewell Taylor — owner of the Sazerac Coffee House located on Exchange Alley — institutionalized the cocktail by using only Sazerac de Forge et Fils Brandy, a brandy which Taylor imported and sold exclusively. By 1869, Thomas H. Handy had purchased the Sazerac Coffee House from Taylor and by the turn of the century, a phylloxera epidemic forced coffee houses (at the time, the term "coffee house" was used to refer to a cocktail bar) to use rye whiskey rather than brandy in the making of the Sazerac.

The Sazerac 18-year-old is a straight rye whiskey that pays tribute to the Sazerac name. It's a very mature whiskey with deep oak, leather, and spice notes. The 2019 release saw the expression earn "Best Rye Whiskey Aged 11 Years and Over" by Jim Murray's Whisky Bible. The 2020 continues in the same fashion. The barrels were filled in 2002 and the whiskey was bottled at 90 proof in 2020.

The nose has candied apple and sweet mint aromas. There's plenty of oak on the palate with caramel and dark chocolate. The finish is long with coffee, black pepper, and cherry notes.